I met an angel in a red car. Even if he wasn’t a real, bonafide, heavenly-being kind of angel, he was an angel—sent by God—for a heavenly mission! 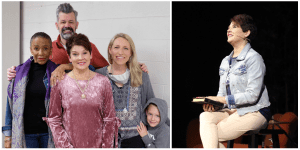 Thank you to Bruce Edwards for the beautiful photos. To see the entire Facebook photo album, click here.

Just one mile from the Detroit airport and one hour before our flight home from Fresh Grounded Faith Flint, our rental car began to shake. A loud scraping sound, like metal against asphalt, filled the interior of our minivan and panic began to rise! This was followed by the sound of shredded rubber flapping in the wind as my husband Phil maneuvered us onto the shoulder of the road.

We were completely assured of God’s presence and care at FGF Flint. We were a family, and God was with us. [Click to Tweet]

A flat tire. And not just flat—it was blown out beyond repair.

Determined to make our flights, we flew into motion. Phil got on the phone with Avis, Terrie (our National Conference Director) grabbed my hand and we prayed, and Terrie’s husband Jimmy got out to assess the damage.

Nobody could find the spare tire; Jimmy even got out the owner’s manual to locate it! Phil calmly worked through Avis’ computerized prompts and, eventually, spoke to a nice lady two thousand miles away who tried to get us off the side of the road. But after the spare tire location was a bust and we realized there was no way the nice lady with Avis could rescue us fast enough, Jimmy called an Uber.

The Uber driver named Peter was 18 minutes away and heading toward us in his red car. If he made it on time, we had a chance to make our flights.

So, we got ready! We hauled all six pieces of luggage out of the defunct van and gathered together like a weary band of middle-aged hippie hitchhikers on the side of the highway waiting for a ride. Phil, by the way, was still on the phone with Avis and now giving them our location in latitude and longitude! I’m not kidding. At this point, our flight was leaving in 40 minutes.

When a red car zoomed by us, Terrie and Jimmy threw their hands up in the air like castaways signaling the rescue ship. The car flew past us like a red blur before pulling over, and what happened next went by so fast that I can barely believe it.

The driver couldn’t turn around on the highway, so he just hit reverse and drove backwards on the shoulder until he reached us. “Are you Peter?” Terrie yelled over the roar of the traffic. “Are you Uber?” she yelled again. At this point, Terrie is totally amped up and running toward the red car! “No. I just see you need help,” the man replied in Romanian-accented English. “You need go to airport? I take you. What airline?”

Nobody considered safety—like this guy could be a crazy man looking to kidnap four sweaty middle-aged unhinged adults and steal their luggage full of dirty clothes! It could happen?!

But safety was the last thing on our minds, so off we went.

Terrie grabbed me while Jimmy grabbed the luggage, and Phil—who was STILL on the phone with Avis—one-handedly secured the van we were about to abandon.

The nice man in the red car then lept into action. It was like a scene from a movie! He jumped out of his driver’s seat and opened the back door. His back seat was full of auto parts including a full-sized bumper. He tossed each piece onto the side of the highway in front of our useless minivan. “I come back and get it after I take you to airport.”

After he and Jimmy threw all our belongings into his car, we crammed all five of us into his vehicle and sped off.

“God bless you,” I said after catching my breath. “He does,” the man replied. Oh girl! He then went on to explain that he was a believer in Christ and his name was Daniel. It was like a mini revival at 80 miles per hour!

Then with the same fluidity that he got us into his car, he somehow got us out at the curb of the American Airlines terminal at the Detroit airport! We now had only 30 minutes until takeoff.

We exchanged “thank you’s” and “God bless you’s” and praised our Father who did this for us, and then we parted ways! Terrie and Jimmy ran and caught their flight, but Phil and I got hung up trying to check luggage and didn’t make ours. We did eventually catch another flight and got home at 2:00 a.m.

And that, my friend, is a perfect summary of our whole weekend at Fresh Grounded Faith Flint. We were a family, and God was with us. He showed us his compassion and care, and He answered our prayers. Between Laura Story’s music, Karen Abercrombie’s drama, Shaun Groves’ worship and story, and Ann Voskamp’s beautiful truths, we were completely assured of God’s presence and provision.

It was such an inspiring weekend from start to finish!

Big thanks to our host church, Central Church of the Nazarene, and our Local Conference Coordinator, Carol Wehrli. We’re so grateful for her and all of the wonderful volunteers from all of our co-host churches.

And we got the privilege of seeing God move in the hearts of women! We celebrated 5 new sisters in Christ, 39 women who chose to renew their commitment to the Lord, and 60 children sponsored through Compassion International. Praise the Lord!

Our angel Daniel in the speedy red car was just one flyby example of God’s care for us, but the truth is that He cares for us invariably—in every moment, without exception. So take courage, my friend, in His unwavering faithfulness and provision.

Jennifer and the FGF Team!

Reviews: See what others are saying about FGF!

Would you like to attend a Fresh Grounded Faith conference? Or, bring one to your city? Click on the buttons below to find out more information.

Plus, you can join me over on my 4:13 Podcast! Each week, you’ll get biblical encouragement as we answer a question about how to live the “I Can” life of Philippians 4:13. Go here to listen to the latest episodes.

Comment | Share | Tweet | Pin It | print | email
Categories: Blog, Fresh Grounded Faith
Disclosure of Material Connection: Some of the links in the post above are “affiliate links.” This means if you click on the link and purchase the item, I will receive an affiliate commission. Regardless, I only recommend products or services I use personally and believe will add value to my readers. I am disclosing this in accordance with the Federal Trade Commission’s 16 CFR, Part 255: “Guides Concerning the Use of Endorsements and Testimonials in Advertising.”

Find FGF Events Near You

Read Highlights from Past FGF Events

What Host Churches Are Saying About FGF

FGF Springfield, IL jump started a richer and better community of churches united as the BODY OF CHRIST when we invited over 10 Co-Host Churches to join us for an amazing weekend experience. FGF is well organized and supports the host church with an amazing FGF team!


I could never have predicted the way that Fresh Grounded Faith would impact our faith community. The conference far exceeded any expectation that we had going in. It was well-organized from day 1 of the planning all the way to the weekend of the conference, and every single interaction with Terrie Bitter and the other FGF staff was filled with grace and love.


We were so blessed to have Fresh Grounded Faith in New Orleans, we are still hearing testimonies from women and men about how God has changed and transforming their lives (and their spouses), even our security guards loved it. Many have told us this event is one of the best they have ever been to, and some commented that the quality is just as good as Women of Faith, Beth Moore and other large events they have attended,


OH. MY. GOODNESS. Fresh Grounded Faith was so much more than a conference. FGF was a gift to us and our local churches. Volunteer teams from so many different churches became friends and worked together with laughter and hugs and they just really meshed together in Jesus' name to prepare this place for God to move... and HE DID. Beautiful things unfolded and there are just no words to describe it. This is a team truly serving and honoring God.


I continue to be overwhelmed by God's goodness, His faithfulness, His provision. I have never encountered a better organized and prepared event...you are amazing. Each team lead and every person on our staff were very blessed to serve with FGF and you. Every woman I saw, in some way or another, conveyed that this was the very best women's event they have ever attended.


After several years of hosting women's events within our church, we felt God leading us to reach out beyond our local community, but did not know where to begin. From the moment we learned about FGF, I knew they had the vision and experience to enable us to expand our ministry. One of the biggest blessings of our relationship with FGF was the ability to partner with other churches in our region, who shared the common bonds of loving God, studying His Word, and being inspired by the Spirit filled teaching of Jennifer Rothschild.

Bring FGF to Your Church

About Our Work and Mission

OUR VISION:
Women Transformed Through Grace & Truth
“Do not let kindness and truth leave you; bind them around your neck, write them on the tablet of your heart.” Proverbs 3:3

OUR MISSION:
We honor God and serve women through Christ-centered, life-transforming content, events and services.

OUR CULTURE MARKERS:
We have four values that ground us and guide us. These four culture markers help us “rise” to fulfill our mission and reach our vision.
Relationship.
Influence.
Stewardship.
Excellence.

I – INFLUENCE:
Everything we do has an impact.
Our attitudes and actions influence others, the overall culture of the ministry and the lives of those we serve.
“You are the salt of the earth... the light of the world” Matthew 5:13-16

S – STEWARDSHIP:
We don’t own our gifts or this ministry, we are stewards. God is our ultimate Master. Stewardship means we take our work seriously, grow and improve; learn and change as needed to honor God.
“As each has received a gift, use it to serve one another, as good stewards of God's varied gifts” 1 Peter 4:10

E – EXCELLENCE:
We give 100% in whatever we do. We reject perfectionism yet we don’t settle for mediocrity or mistakes.
“Show yourself in all respects to be a model of good works...” Titus 2:7