This past weekend, I was with family I had never met before in Wichita Falls, Texas. Yep, it was Fresh Grounded Faith! Sister, it was like going home. 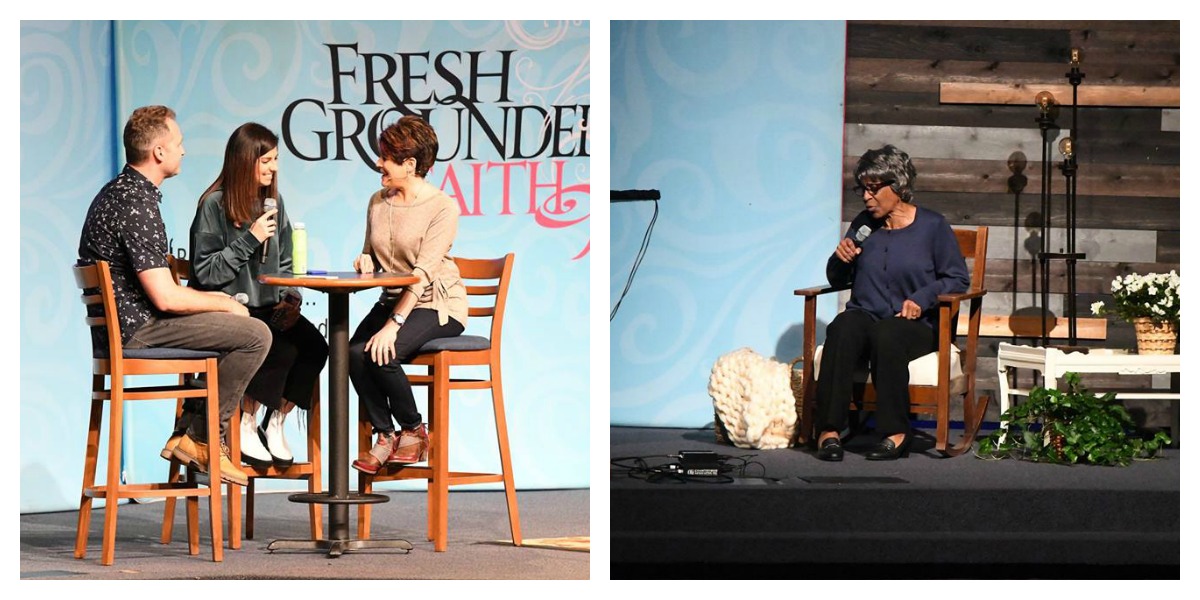 Thank you to Sherla Williams for the beautiful photos. To see the entire Facebook photo album, click here. For those of you who joined the photo booth fun, you can view your photos here.

In Christ, we are brothers and sisters, and it was so obvious at this event. Let me just tell you two quick stories that proved this.

First, at the meet and greet, I told the volunteers about my Mere ChristianiTea. If you have no idea what I’m talking about, it’s my own tea blend named in honor of my favorite dead author, C.S. Lewis! We serve it at the conference.

Anyway, after the meet and greet was over, our National Conference Director, Terrie, came into the sanctuary where I was about to do a sound check. She brought with her a dear woman who was in tears and wanted to speak to me. Through her tears, she said her 40-year-old son had died this last November. She believed he was a Christian, but as far as she knew, he wasn’t walking with the Lord at the time.

Just two hours before she arrived at church for the volunteer meet and greet, her son’s widow had stopped by to tell her goodbye because the widow was moving to another state. As the mother and daughter-in-law said their goodbyes, the widow gave her a book that her son was reading when he died … yes, C.S. Lewis’ Mere Christianity. She described how when I mentioned that title, she felt such comfort and affirmation from our Father God that her son was home.

At FGF Wichita Falls, Texas, we were reminded that where this is family, there is home! [Click to Tweet]

Then, as the conference began Friday night, it became obvious that something was going on in the auditorium that had nothing to do with what Meredith Andrews and I were doing on stage.

There was a group of women on cell phones and crying. Terrie went over, introduced herself, and asked what was wrong and if she could assist them in any way.

The women’s ministry leader was sobbing and said they had just gotten a phone call that their Senior Pastor Ron had been taken to the emergency room. His wife, Claudia, had just left with a couple of other ladies in a mad dash to get to the Emergency Room.

Their little country church of about 100ish people was in a community about an hour and a half away. It wasn’t long before the few ladies from their church that remained got the phone call they dreaded. They streamed out into the lobby sobbing. They were heartbroken that Claudia hadn’t had enough time to reach the hospital before her husband passed. My heart broke for all of them.

They were all trying to decide whether to stay or to leave. So, while I was on stage teaching, Terrie led them in a time of prayer in the lobby as they joined hands. Then all of the men who were volunteering with set up and security, came over and encircled and prayed for them. There was such comfort when the men prayed over all of them.

The Scripture that comes to mind is Romans 12:15, “Rejoice with those who rejoice; mourn with those who mourn.” In a single moment, a group of strangers proved who the family of God is. We love each other. We celebrate together. We bear each others’ burdens and meet each others’ needs. Even those of us who did not know this dear pastor grieved for him, for his wife, Claudia, and for their church.

Then, on Saturday morning, the senior pastor of our host church, First Baptist Church (FBC) Wichita Falls came to the church early to minister to and pray over the ladies who had just lost their pastor. It was a beautiful display of family.

So, speaking of family, God added to His family this weekend! We are celebrating the 6 ladies who made decisions for Christ, the 37 women who chose to renew their commitment to Christ, and the 36 children sponsored through Compassion International.

Many thanks to our amazing Local Conference Coordinator, Anne Harrison, and our host church, FBC Wichita Falls. My team and I are so grateful for all the ways they made us feel like family.

And, it was wonderful to have Meredith Andrews and Karen Abercrombie with us again. As always, they were such a blessing! Also, our “Spill the Beans” with Meredith and Tyrus from Compassion International was such fun!

This weekend reminded us all that God is sovereign and He knew from the beginning why He was sending us to FGF Wichita Falls. Father God was showing each of His children that we were home because we are family. And that means we can be at home with each other. Accepting each other, loving each other, supporting each other, caring for each other, and strengthening each other. I am so grateful to be part of the family of God!

Were you with us in Wichita Falls? Please share your favorite part of the weekend in the comments below.

Would you like to attend a Fresh Grounded Faith conference? Or, bring one to your city? Click on the buttons below to find out more information.

Comment | Share | Tweet | Pin It | print | email
Categories: Blog, Fresh Grounded Faith
Disclosure of Material Connection: Some of the links in the post above are “affiliate links.” This means if you click on the link and purchase the item, I will receive an affiliate commission. Regardless, I only recommend products or services I use personally and believe will add value to my readers. I am disclosing this in accordance with the Federal Trade Commission’s 16 CFR, Part 255: “Guides Concerning the Use of Endorsements and Testimonials in Advertising.”

Find FGF Events Near You

Read Highlights from Past FGF Events

What Host Churches Are Saying About FGF

FGF Springfield, IL jump started a richer and better community of churches united as the BODY OF CHRIST when we invited over 10 Co-Host Churches to join us for an amazing weekend experience. FGF is well organized and supports the host church with an amazing FGF team!


I could never have predicted the way that Fresh Grounded Faith would impact our faith community. The conference far exceeded any expectation that we had going in. It was well-organized from day 1 of the planning all the way to the weekend of the conference, and every single interaction with Terrie Bitter and the other FGF staff was filled with grace and love.


We were so blessed to have Fresh Grounded Faith in New Orleans, we are still hearing testimonies from women and men about how God has changed and transforming their lives (and their spouses), even our security guards loved it. Many have told us this event is one of the best they have ever been to, and some commented that the quality is just as good as Women of Faith, Beth Moore and other large events they have attended,


OH. MY. GOODNESS. Fresh Grounded Faith was so much more than a conference. FGF was a gift to us and our local churches. Volunteer teams from so many different churches became friends and worked together with laughter and hugs and they just really meshed together in Jesus' name to prepare this place for God to move... and HE DID. Beautiful things unfolded and there are just no words to describe it. This is a team truly serving and honoring God.


I continue to be overwhelmed by God's goodness, His faithfulness, His provision. I have never encountered a better organized and prepared event...you are amazing. Each team lead and every person on our staff were very blessed to serve with FGF and you. Every woman I saw, in some way or another, conveyed that this was the very best women's event they have ever attended.


After several years of hosting women's events within our church, we felt God leading us to reach out beyond our local community, but did not know where to begin. From the moment we learned about FGF, I knew they had the vision and experience to enable us to expand our ministry. One of the biggest blessings of our relationship with FGF was the ability to partner with other churches in our region, who shared the common bonds of loving God, studying His Word, and being inspired by the Spirit filled teaching of Jennifer Rothschild.

Bring FGF to Your Church

About Our Work and Mission

OUR VISION:
Women Transformed Through Grace & Truth
“Do not let kindness and truth leave you; bind them around your neck, write them on the tablet of your heart.” Proverbs 3:3

OUR MISSION:
We honor God and serve women through Christ-centered, life-transforming content, events and services.

OUR CULTURE MARKERS:
We have four values that ground us and guide us. These four culture markers help us “rise” to fulfill our mission and reach our vision.
Relationship.
Influence.
Stewardship.
Excellence.

I – INFLUENCE:
Everything we do has an impact.
Our attitudes and actions influence others, the overall culture of the ministry and the lives of those we serve.
“You are the salt of the earth... the light of the world” Matthew 5:13-16

S – STEWARDSHIP:
We don’t own our gifts or this ministry, we are stewards. God is our ultimate Master. Stewardship means we take our work seriously, grow and improve; learn and change as needed to honor God.
“As each has received a gift, use it to serve one another, as good stewards of God's varied gifts” 1 Peter 4:10

E – EXCELLENCE:
We give 100% in whatever we do. We reject perfectionism yet we don’t settle for mediocrity or mistakes.
“Show yourself in all respects to be a model of good works...” Titus 2:7