When Phil and I were newlyweds, we were in Wal-Mart one day getting some duplicate keys made. As we waited at the counter, my cell phone rang, and I turned slightly away from Phil to take the call.

(By the way, if you’re a new reader, this might be a good time to tell you I’m blind.) 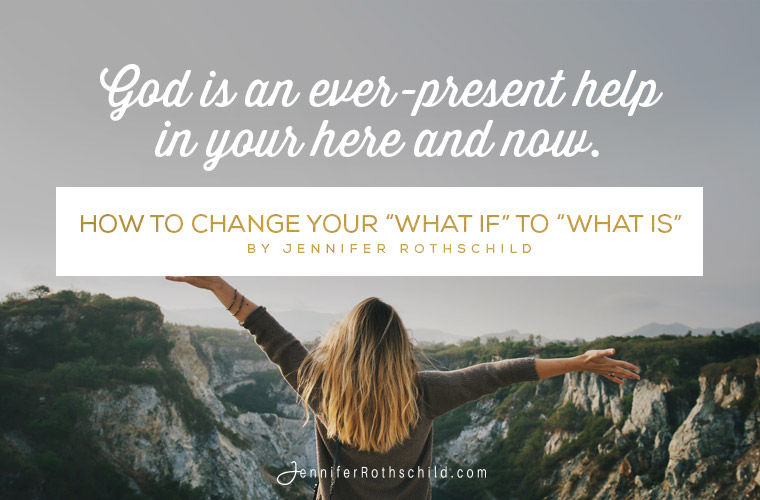 When I hung up a few minutes later, I reached out to put my arm around Phil’s waist. As I did, I slipped my hand down and patted him on his—well, you know. We were newlyweds, after all!

As I did, I heard him say, “Jennifer, what are you doing?”

I could tell he was trying to hold back a laugh. I could also tell his voice was not next to me anymore, but behind me. I was horrified when I realized he had stepped away from the counter while I was on the phone, and another man had taken his place.

By now, Phil was laughing. I didn’t have my cane out, and I don’t really look blind at first glance, so I’m sure the man had no idea why I had so brazenly patted his backside. I could feel myself turn every shade of red God ever created as the confused and violated man muttered, “No problem,” and stepped away.

We aren’t the first ones to grapple with questions of, ‘If God had been here…?’ [Click to Tweet]

“Tell him I’m blind,” I whispered through clenched teeth. Phil was laughing so hard he couldn’t even talk.

“If you had been here, this would not have happened!” I scolded him.

Does that phrase sound familiar? Perhaps you’ve found yourself saying something similar such as, “If You had been here, God, then…”

Friend, you and I are not the first ones to grapple with “if/then” speculations. The apostle John tells of Martha and her sister Mary, who were heartbroken when their brother Lazarus died.

Jesus was a family friend, so they had sent word to Him that Lazarus was deathly ill. But Jesus didn’t get there until it was too late, and Lazarus died. When Jesus finally arrived, Martha said, “If you had been here, my brother would not have died” (John 11:21).

I love the way she just tells Jesus how it is. And we all get it. We know Martha is saying with her heart, “Lord, I trusted You. Where was Your presence when we needed You most?”

But was Martha’s statement to Jesus true?

Martha believed Jesus’ presence would protect Lazarus from death. She knew He could touch her brother and heal him completely. As far as she was concerned, if Jesus had been there before Lazarus breathed his last breath, then Lazarus would not have died.

God’s presence comforts us as He carries us through the hard and awful things. [Click to Tweet]

Yet isn’t it also possible that Lazarus could have died with Jesus right there with him, holding his hand? The truth is, yes.

If you need to shift your focus from “what if” to “what is,” here’s a free gift for you! This free “My God is…” Character Collection﻿ will help you draw closer to the Lord and meditate on His character and promises found in the Word.

Like Martha, have you ever placed any “ifs” on God?

“If” is a word of speculation; it is not a word of reality.

When we use the word “if” with God, we are pining for the past or projecting ourselves into the future.

When we don’t understand God’s ways, we can switch our focus from ‘what if’ to ‘what is.’ [Click to Tweet]

But thoughts like these can keep us from being present and attentive to what God is doing in our lives right now.

Oh girl, instead of creating “if/then” scenarios to satisfy what we don’t understand about God’s ways, let’s switch our focus. Instead of  “what if” let’s choose to focus on “what is.” And, here is what is:

God is with us.

There’s no need to fantasize about the future, or to pine for the past. God is here in the present. [Click to Tweet]

God is an ever-present help in times of trouble.

Sister, there is no need to fantasize about the future, or to pine for the past. God is here and we can claim His promises as our own. And He promises, “Never will I leave you; never will I forsake you” (Hebrews 13:5), and “Surely I am with you always, to the very end of the age” (Matthew 28:20).

And He didn’t use the word “if” at all in His promises—so we don’t need to either!

How is God’s presence comforting and encouraging you right now in a present challenge, situation, or struggle you face? Share in the comments below.

Comment | Share | Tweet | Pin It | print | email
Categories: Blog, Not Fair Book
Disclosure of Material Connection: Some of the links in the post above are “affiliate links.” This means if you click on the link and purchase the item, I will receive an affiliate commission. Regardless, I only recommend products or services I use personally and believe will add value to my readers. I am disclosing this in accordance with the Federal Trade Commission’s 16 CFR, Part 255: “Guides Concerning the Use of Endorsements and Testimonials in Advertising.”