Last November was an election like no other! The voters’ voices were heard, the protesters concerns were noted and now, the ballots are counted, the Electors have voted and… ta-da! (or uh-oh) Inauguration Day is almost here! 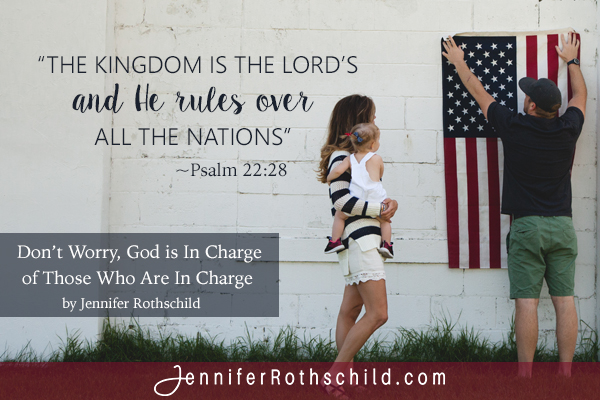 Now, if the election went your way, well, all that is just groovy! But, if you didn’t want Trump to be the president, well then Inauguration Day may flat-out depress you.

No matter which side of the aisle you stand in, you can keep perspective on this new season in America. Here’s why: America didn’t just elect a new Commander-in-Chief to be president.

God is sovereign and in control of even what seems crazy and out of control. [Click to Tweet]
God, the Commander of the universe allowed him to be president.  “…the Most High is sovereign over all kingdoms on earth and gives them to anyone he wishes and sets over them the lowliest of people.” (Daniel 4:17)

God is sovereign and in ultimate control — even over what seems totally crazy and out-of-control!

Here are 2 kings who prove this point…

He was the King of Assyria, and not normally a nice guy. He was over all the captive Jews, but God stirred his heart to release them so they could return back home to Jerusalem. The Jews were then able to rebuild the Temple. God was in charge of Cyrus and He used him to accomplish the greater plan.

God has ultimate influence over the hearts of leaders who influence the future of nations. [Click to Tweet]

Everyone thought of King Nebuchadnezzar as the biggest, baddest king of his generation. And, in his mind, King Neb thought of himself that way too. He took credit for everything his eyes could see. He was powerful and proud, but God allowed Neb to be put in his place and humbled. King Neb lost his mind — at least for 7 years — and the result was that he realized Who was really in charge.

God has ultimate influence over the hearts of leaders who influence the future of nations.

When we realize that God has every leader in His hands, we can stop wringing our own! We can quit worrying and trust Him because, “The kingdom is the Lord’s, and He rules over the nations.” (Psalm 22:28).

God hasn’t fallen off His throne just because Donald Trump is about to sit in the Oval Office. God is not sharing His throne with any earthly leader either. Whether you are in despair or totally delighted about Trump being our next president, remember who is really in charge.

God is in charge of those who are in charge.

What we need is a whole lot less despair and division and a whole lot more prayer. Pray for our new president. Pray for God’s will to be done here on earth as it is in Heaven. Pray for humility. Pray for wisdom. “I urge, then, first of all, that petitions, prayers, intercession and thanksgiving be made for all people — for kings and all those in authority, that we may live peaceful and quiet lives in all godliness and holiness. This is good, and pleases God our Savior.” (1 Timothy 2:1-4)

Lord, we petition You for the health of our nation. We pray for Donald Trump — make Him into a leader Who honors You and is an instrument of Your will. We, as Your people, intercede for him — give him wisdom, humility and compassion. Your Word tells us to be thankful, so no matter how we feel about the election results, we thank You for our new president and we thank You for being in charge of those who are in charge. May Your will be done here on earth as it is in heaven. Amen.

Leave a prayer for America and her president in the comments below. (And, NO political comments please — no gloating; no insults — only humble prayer that honors God. Thanks!)

Comment | Share | Tweet | Pin It | print | email
Categories: Bible Study, Blog, My Thought Closet
Disclosure of Material Connection: Some of the links in the post above are “affiliate links.” This means if you click on the link and purchase the item, I will receive an affiliate commission. Regardless, I only recommend products or services I use personally and believe will add value to my readers. I am disclosing this in accordance with the Federal Trade Commission’s 16 CFR, Part 255: “Guides Concerning the Use of Endorsements and Testimonials in Advertising.”