“Clayton,” I said “the violin concert is in a few hours. Does your uniform need ironing?”

Eighth grade Clayton stood from his computer and pulled his embroidered shirt from the closet. 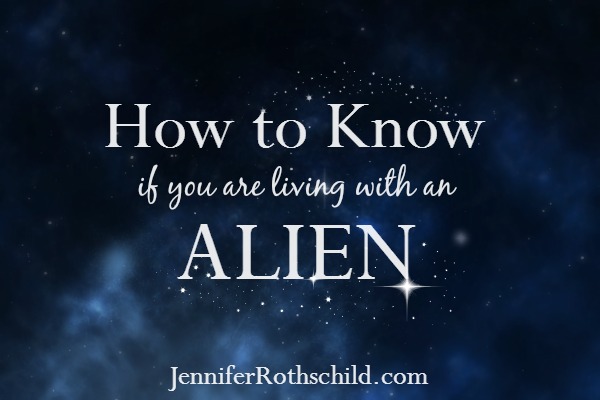 “What about your black pants?”

“They’re way too small. The waist is too tight, and when I sit, they come all the way up to my knees.”

“Son, there’s no time to buy new ones before the concert. You should have told me. You’ve had two weeks! You’ll just have to wear the small ones.”


Sometimes, I think I must be living with aliens. Read about my encounter.
[Click to Tweet]
Okay, calling all moms: You get it, right? I was stressed out and confused. To me, this would constitute a fashion emergency of the worst kind, right?! But, to Clayton? Nope.

He tried on his dad’s smallest pair of black pants and the length was perfect. But, that was all that was perfect. The waist was huge and the inseam fell to his knees. I told him they were much too big, but his response was, “I’ll wear a belt.”

I just rolled my eyes and swallowed my pride and went with Phil and Droopy Drawers to the concert an hour later.

The concert began. The middle school gym was hushed as the conductor announced that the orchestra would play a waltz by Strauss.

A sweet melody filled the gym. Phil gently placed his hand on my back.

I relaxed and got lost in the moment.

We may live here on earth, but we don’t have permanent residency. We are just passing through.
[Click to Tweet]
But as the bows slid across the strings, Phil slid his hand across my back in rhythm. And, each time the students plucked the strings, Phil poked my back right along with them. Phil was playing the Blue Danube across my back! Are you kidding me?

I thought, “What is he doing?!! He’s going to rub and poke his way through the whole waltz! As I turned to glare at him, he snickered.

That’s when it hit me… I live with aliens.

One was fourteen wearing gigantic pants and the other was in his forties tapping and poking me like a sugared-up adolescent!


Our customs should be centered around the kingdom instead of the world.
[Click to Tweet]
They cannot be from this planet!

They were both completely oblivious to cultural norms like well-fitting pants and basic concert decorum. Aliens!

I am an alien too.

The best kind of alien. And, if you are in Christ, you are an alien too.


When the world tells us to seek revenge, we give forgiveness.
[Click to Tweet]
Being an alien means you have no permanent ties to the place you live. And, shouldn’t that describe us as believers here on planet earth?

We may live here on earth, but we don’t have permanent residency.

It reminds me of Augustine’s idea of the civitas peregrina. It’s the thought that you and I are simply passing through. We are resident aliens here on earth. Our true home is what Augustine called the “City of God.” But, until we are actually home, we live in the “City of Man.”

We aliens have different customs — they’re not like the customs of this world — they’re kingdom customs.

When the world tells us to look out for number one, we look to the One True God.
[Click to Tweet]
When you think of it like that, being an alien is where it’s at, isn’t it?!

So, as we pass through, let’s leave our mark on this world. And, instead of being transformed by it, let’s transform it with the love of Jesus!

Question: What are some other customs that make us alien to this world?