My Dr. Phil and I recently went on a cruise — just the two of us. It was so fun just to be together and relax and eat…eat…eat…eat…and eat some more! Well, you know…It’s a cruise!

The first port on our cruise was Key West, Florida. 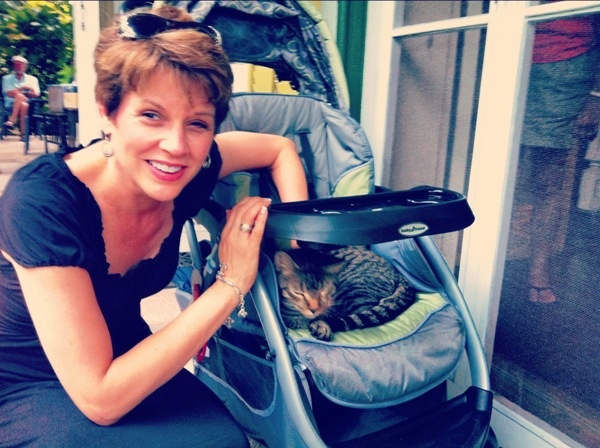 Phil and I rented a scooter and put-putted about the island.

If you have read my blogs for a while you won’t be surprised! I do have a thing for dead authors! Novelist Ernest Hemingway lived and wrote here for more than ten years beginning in 1931.We stepped back in time as we meandered through the rooms and gardens that witnessed the most prolific period of this Nobel Prize winner’s writing career.

I got to dip my toe in his swimming pool and walk out on his balcony. It was fun to imagine how this ordinary man with extraordinary talent must have lived.

Though I was impressed by the swimming pool built in 1937, costing $20,000 and the chandeliers imported from Europe, it was the cats that captured my imagination.

The Ernest Hemingway Home and Museum is home to approximately 40-50 six-toed residents…cats!

When we went inside Ernest’s master bedroom, the tour guide apologized that the bedspread was disheveled; “the cats like to jump on it” he explained. “They are the only guests allowed to touch the bed!”

Hemingway loved cats – especially ones with six toes and his home today still reflects that love.  Cats normally have five front toes and four back toes. About half of the cats at the Hemingway home are six-toed but they all carry the six-toe (polydactyl) gene. The fuzzy creatures look like they are wearing mittens because it looks like they have a thumb on their paw.

Ernest Hemingway was given a white six-toed cat by a ship’s captain which he named “Snowball.” Most of the cats who live on the Hemingway property are grand-cats and great grand-cats of Snowball! I even got to pet one of the little great grand-kittens. He was curled up in a baby carriage no less! Adorable!

Hemingway was a brilliant writer; master of the concise short sentence.  But his life was also plagued by alcoholism, depression and failed relationships.


But man is not made for defeat. A man can be destroyed but not defeated.

Even though his life was destroyed by suicide in 1961, a whimsical quiet triumph remains. No, I am not referring to his books.

I am referring to the generations of carefree, kittens who frolic about his property and give his legacy a lightness and down-to-earth accessibility. It makes me wish I knew the man, not just the brilliant author, but the ordinary man.

Anyway, if you ever go to Key West, you just must visit the Hemingway Home…and if you do, hug a cat for me!

What are some other must-see sights? Leave a comment here.

Comment | Share | Tweet | Pin It | print | email
Categories: My Thought Closet, Taste This
Disclosure of Material Connection: Some of the links in the post above are “affiliate links.” This means if you click on the link and purchase the item, I will receive an affiliate commission. Regardless, I only recommend products or services I use personally and believe will add value to my readers. I am disclosing this in accordance with the Federal Trade Commission’s 16 CFR, Part 255: “Guides Concerning the Use of Endorsements and Testimonials in Advertising.”