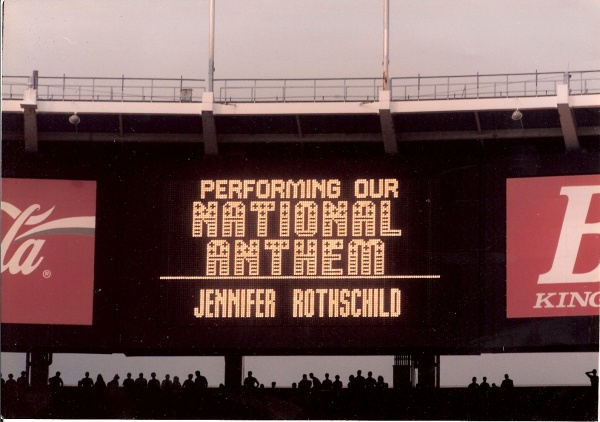 My voice filled the massive stadium.  I could hear it reverberating back to me with every note. But then, something unexpected happened. As I came to the line “and the rockets red glare,” I choked and gagged. Glottal shock! Have you ever heard of it?  Well, 47,000 baseball fans could tell you exactly what it sounds like.

Glottal shock renders the singer momentarily voiceless.  I choked on “glare” and heard myself gag over giant speakers reverberating throughout the stadium.  In that moment, time stood still.  As if in slow motion, I could see 47,000 faces slowly contorting into confused and shocked expressions.

I wanted to evaporate. I wanted to drown in a sea of Maalox. But I couldn’t. I had to finish the song.

Making my recovery, I finished strongly as I belted out “and the home of the brave!”  The stadium erupted in applause, and I nearly melted in sweet relief.  I was so glad that it was over.

As Phil walked me off the field, he said, “Way to go, honey.  Way to recover.”  When I met up with my folks, my Dad spoke of how proud he was, and my Mom echoed her sentiments.  As I ran into friends, they were generous with their compliments.  But all I could think about was the glottal shock.

That one stadium-sized mistake. The broken word, “glare,” replayed over and over in my mind. Do you know how many words are in our national anthem?  To save you the singing and counting, I’ll fill you in.  There are 82.  And I sang 81 words well.  Even so, I couldn’t hear the applause.  I couldn’t hear my parents’ compliments or my husband’s consoling words or my friends’ congratulations.  All of the positives were overwhelmed and overshadowed by that one sour note.  I was humiliated and haunted by my mistake.

Finally, after several days of self-scrutiny, I told myself to focus on the 81 words I sang well rather than the one word I choked on.  One wrongly sung word doesn’t justify quitting—not for me and not for you!

Douglas MacArthur once said, “Age wrinkles the body; quitting wrinkles the soul.”  Does your soul ever get wrinkled?

Are you prone to quitting when things don’t turn out the way you hoped?  One poorly sung note will often make you want to stomp off the field andd swear off singing forever, but to you, my sisters, I say, sing on.  Someone else once put it this way: When your dreams turn to dust, vacuum!

For more information about Self Talk, Soul Talk visit www.selftalksoultalk.com.

What do you do when things don’t go your way? Leave a comment here.