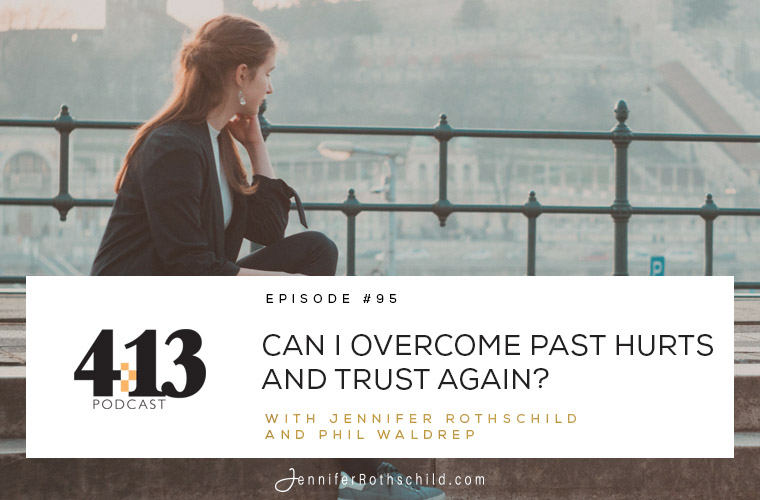 We’ve all felt betrayed at some point in our lives and it sure does hurt. Betrayal has the potential to destroy our trust in people and dismantle our faith in God. It can leave us wounded and feeling powerless to move on. And, often, forgiveness and healing can take a lifetime.

As you forgive, you allow God’s plan to be the glue that puts all the broken pieces back together. [Click to Tweet]

But friend, they don’t have to. On this episode of the 4:13 Podcast, author Phil Waldrep shares his painful experience of betrayal and how he learned to forgive and trust again. And, he gives you eight practical ways to manage and move on if you’ve endured the pain of betrayal.

Phil is the founder and CEO of the wildly popular Women of Joy conferences. He’s also the author of the acclaimed parenting book, Reaching Your Prodigal, and the new book, Beyond Betrayal: Overcome Past Hurts and Begin to Trust Again. He’s married to Debbie, and they live in Alabama … as you’ll hear in his accent!

So, pull up a chair and lean in. This is your day to get off the path of resentment and step into a life of health and wholeness.

How to Overcome Past Hurts and Trust Again

If you’ve been betrayed, here are practical ways you can overcome hurts and learn to trust again. [Click to Tweet]

If you’re walking through the pain of betrayal, you aren’t alone. Jesus understands. He’s right there with you. As Phil said, “As you forgive, you’re allowing God’s plan to be the glue that puts all the broken pieces back together.” So, keep trusting Him with the process, my friend.

And remember, whatever you are feeling right now, however you’ve been hurt, healing is yours. You can move on, and you can forgive because you can do all things through Christ who gives you strength.