“I needed God to rescue me. I couldn’t rescue myself.”  -Hannah J.

What started as a choice had become a chain. Fear enslaved her. 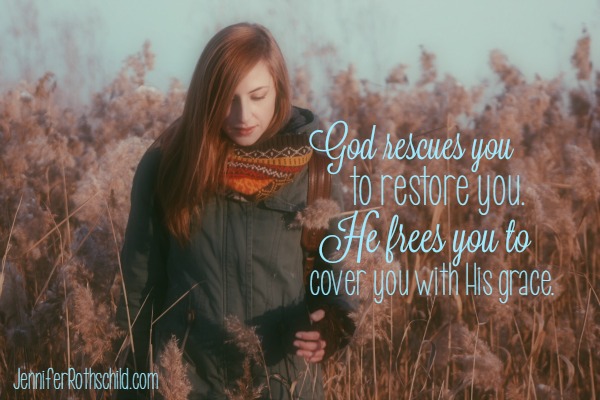 Slowly, Hannah became more isolated. He didn’t like her friends or family. He eventually forbid her from having contact with them. He became the only voice she heard. Constant disapproval and outbursts followed by silence was her daily fare.

She fought hard against her growing feelings of insignificance and insecurity.

She admitted, “I just felt invisible.”

She loved him though. At least she loved the idea of him. At first, she didn’t want to leave and later, she just couldn’t leave. His manipulation and abuse had formed an invisible barbed wire fence around her life.

Every time she sensed that her normal was not normal, emotional confusion paralyzed her.


No matter the circumstances, how I feel is not who I am.
[Click to Tweet]
Maybe she was who he said she was?

Hannah often turned to the Bible for comfort. However, Scripture stung her; it hurt. The man she loved had used the Bible as one of his weapons — the stealthiest weapon imaginable — to beat her down.

He was quick to point out her sin. He would quote Scripture to explain why she was a failure and disappointment to God. He created rules and regulations that he claimed were biblical to dictate what she wore, where she went, and how she talked.

Her spirit was crumbling, but deep down there was a vapor of strength.

It stirred beneath the rubble of her broken spirit. Though she was chained up with fear and enslaved by insecurity, she sensed a stubborn strength yanking on those chains.

Something in her knew the God she trusted wasn’t the twisted taskmaster her lover claimed.

Something in her knew that how she felt was not who she was.

One night, Hannah took the Bible into her shaky hands and instead of it being a baseball bat that beat her up, it became the blanket that warmed and comforted her. It became the key that unlocked her heart.


The Bible is the key that can unlock my heart.
[Click to Tweet]
Through tears, Hannah read the words in Isaiah, about how Jerusalem had “relied on oppression and depended on deceit” (Isaiah 30:12).

God used His Word to help her see that even though she hated the oppression she was under, she had trusted it — she was dependent on it. God used His beautiful Word to gently show her that she was like Judah—trying to draw identity and acceptance from oppression. And, like Judah, she too was deceived.
So she cried to God, “Rescue me, I cannot rescue myself.”

And He did. God rescued her.

God can rescue me when I can’t rescue myself.
[Click to Tweet]
But, His rescue was — and is — painful.

Without explanation, Hannah was out. Rejected. Again, she felt totally invisible.

But, rejection was her rescue.

Now she is free from that man and his lies and oppression. Yet, she grieves for her lost years. She is still detangling the web of lies she has believed. She struggles with feelings of guilt and shame. But how she feels is not who she is! God rescued her to restore her.

He didn’t just rescue her from the situation; He rescued her to Himself.

God rescued her into His love — His love gives; it doesn’t take.

His love frees; it does not enslave.

His love gives her identity; it doesn’t take it from her.

God rescues you to restore you.
[Click to Tweet]
You may be Hannah or feel like Hannah. Or you may love an Hannah. Maybe the words you are reading right now are your rescue?

God rescues you to restore you. He frees you to cover you with grace — not control you with guilt.

You may have trusted in oppression and are stuck in lies; beaten down and incapable of rescuing yourself. God can and will rescue you. Cry out to Him. Embrace His rescue even if He pulls it off in a way you don’t expect — even if the rescue is painful.

Trust more in Him than you trust in the oppression that has crushed and controlled you.

Oh my friend, He sees Hannah and He sees you. You are not invisible to God.

A prayer for Hannah:
Lord, rescue the woman who cannot rescue herself. Draw her to Yourself with cords of love. Lift her eyes from oppression and let her see that You are The Lover of her soul. Give her ears to hear Your voice, faith to trust Your Word and courage to follow You. Rescue her Lord and restore her to her true identity. Amen.

Is there something in your life you need rescuing from?  Leave a prayer in the comments, asking the Lord to free you from whatever is binding you.

Comment | Share | Tweet | Pin It | print | email
Categories: My Thought Closet, Taste This
Disclosure of Material Connection: Some of the links in the post above are “affiliate links.” This means if you click on the link and purchase the item, I will receive an affiliate commission. Regardless, I only recommend products or services I use personally and believe will add value to my readers. I am disclosing this in accordance with the Federal Trade Commission’s 16 CFR, Part 255: “Guides Concerning the Use of Endorsements and Testimonials in Advertising.”