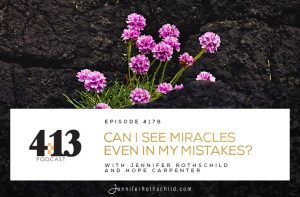 GIVEAWAY ALERT: You can win the book The Most Beautiful Disaster by this week’s podcast guest. Keep reading to find out how!

We’ve all made mistakes we deeply regret, haven’t we? Well, today you’ll hear from a woman who nearly destroyed her family, her church, and her ministry by living a double life. But then … God did something miraculous! Out of her brokenness, He made something beautiful.

How many times have you heard a mom described as having “eyes in the back of her head?”  Often, right?  It’s a picturesque way of illustrating that a mom can see what her kids are doing, even when they’re doing it behind her back.

But, have you ever thought about God having “eyes in the back of His head?”

Of course, God is Spirit and utterly omniscient, but think of what that picture could represent.  Does God see what is behind Him?  Does He willingly observe that which is behind Him? What about your sin?  Is it before Him or behind Him?

When King David committed adultery and was confronted by the prophet Nathan, he was devastated.  If you read Psalm 51, you sense that his devastation isn’t because he was caught, but because he realized the blackness of his act.  “For I know my transgressions, and my sin is ever before me.”