We’ve all got stuff, you know? We’ve got hurts, questions and disappointments in our lives.

I’ve got stuff. Blindness is a constant, unrelenting, challenging loss — emotionally, spiritually and even physically. I’ve asked God for healing probably a million times… but, so far, healing hasn’t come. 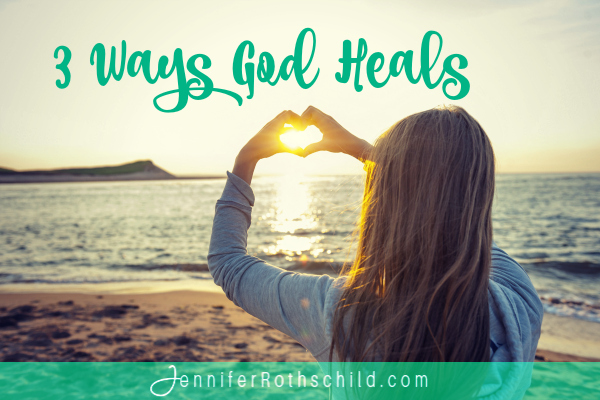 My friend’s got stuff. Her daughter is fighting addiction — some days she’s better, someday she’s worse. My friend has prayed for her daughter a million times too. And, so far, healing hasn’t come.

You’ve got stuff. Even if I haven’t met you yet, I listen to women all over the nation at my speaking events, and I’ve heard your voice in their words. I hear hearts breaking in half as they tell me stories of the husband who left or the job they lost or the parent they’re caring for or the teenager who has made their home a war-zone. Tears fall and hope hides as they describe how they asked God for healing a million times and God didn’t heal.

As I think of all the hurting women I’ve met; as I pray and cry with my friend; as I struggle within my own darkness, I wonder… perhaps God is healing?

God is our Healer and no matter what you’re going through or what you’re asking Him for, He will heal. Healing may just show up differently than you expect.

1. Immediately
Jesus was in the synagogue on the Sabbath and there was a man there who had a shriveled hand. All eyes were on Jesus… would He heal? After all, it was the Sabbath and performing a miracle was a form of work and working on the Sabbath was a big no-no! The Pharisees were ready to pounce if Jesus even thought about healing that man. Not on the Sabbath… not on their watch! But, Jesus always elevated people above procedures so “he said to the man, ‘Stretch out your hand.’ So he stretched it out and it was completely restored, just as sound as the other.” (Matthew 12:13)

It was an immediate miracle. And instant healing. The man stretched his hand toward Jesus and Jesus unshriveled it! Some healings are like that. Instant. Unexplainable. When you least expect it. But, when God chooses to heal immediately, it is ultimately to glorify Himself. Healing proves He is Lord over the rules of man. He is bigger than our expectations! He is The One who chooses the time, the place and the way healing occurs. So, if you’re longing for a miracle, stay in His presence and trust His timing.

2. Gradually
Jesus and His disciples were going through Bethsaida, when some folks brought a blind man to Him asking for healing. (Mark 8:22-25) Jesus took the blind man by the hand, led him outside the village, and touched his eyes. Jesus asked, “Do you see anything?” The blind man looked up and squinted through a foggy haze and said, “I see people; they look like trees walking around.” Things were still blurry. His sight wasn’t totally restored.

Jesus didn’t heal him immediately, He could have, but He didn’t. Instead, He performed a gradual miracle. “Once more Jesus put his hands on the man’s eyes. Then his eyes were opened, his sight was restored, and he saw everything clearly.” The result was healing. The process was different because it was gradual, but the end result was healing. Does that mean that gradual healing is like getting short-changed? Is it like getting miracle from the clearance rack?

God’s presence is far more satisfying than healing. [Click to Tweet]
No, gradual healing is still healing and we don’t always understand why Jesus chooses to heal that way. But to me, a gradual healing seems even more special because that blind man got to feel the touch of Jesus twice. The real blessing of healing isn’t the result, it’s the process. It is in the blessing that comes from being with Jesus, feeling His touch, His comfort, His presence. So, if “people look like trees,” if you haven’t received the full healing or miracle that you want, keep trusting God and thank Him for the honor of His continued presence and touch in your life. His presence is far more satisfying than healing.

3. Eventually
The Apostle Paul had stuff too. He had something painful in his life – he called it a thorn – and he asked God over and over to remove it and evidently, but God did not during Paul’s lifetime. (2 Cor. 12:7-9) As far as we know, Paul died with that painful thorn wedged in his soul. When God answered Paul’s urgent plea for healing, God’s response wasn’t “no.” I think His response was “not yet.” Healing would come. God would answer Paul’s prayer and the answer would come eventually just not now and not yet.

There are no thorns in Heaven. [Click to Tweet]
If God hasn’t healed you yet, don’t assume His answer is “no,” His best answer for you may be “not yet, child.” When God doesn’t grant immediate or gradual thorn removal, He gives something far better, He gives grace. And, that’s what God gave to Paul. “My grace is sufficient for you.” Paul lived with his thorn and he “walked by faith” through every question and every unmet longing. Eventually, Paul’s faith became sight and the thorn was removed for there are no thorns in heaven.

Sister, I know you’ve got stuff and it hurts. Keep trusting your Healer because He hears, He cares and He has His best plan for you.

In the comments, let’s all share what we are asking God for and pray for each other.

Comment | Share | Tweet | Pin It | print | email
Categories: Bible Study, My Thought Closet, The Blind Side
Disclosure of Material Connection: Some of the links in the post above are “affiliate links.” This means if you click on the link and purchase the item, I will receive an affiliate commission. Regardless, I only recommend products or services I use personally and believe will add value to my readers. I am disclosing this in accordance with the Federal Trade Commission’s 16 CFR, Part 255: “Guides Concerning the Use of Endorsements and Testimonials in Advertising.”