That’s what I wanted to say so badly to the woman in line in front of me who was having a five-star meltdown!

I wanted to, but, I did not! I was afraid she would turn around and hit me! 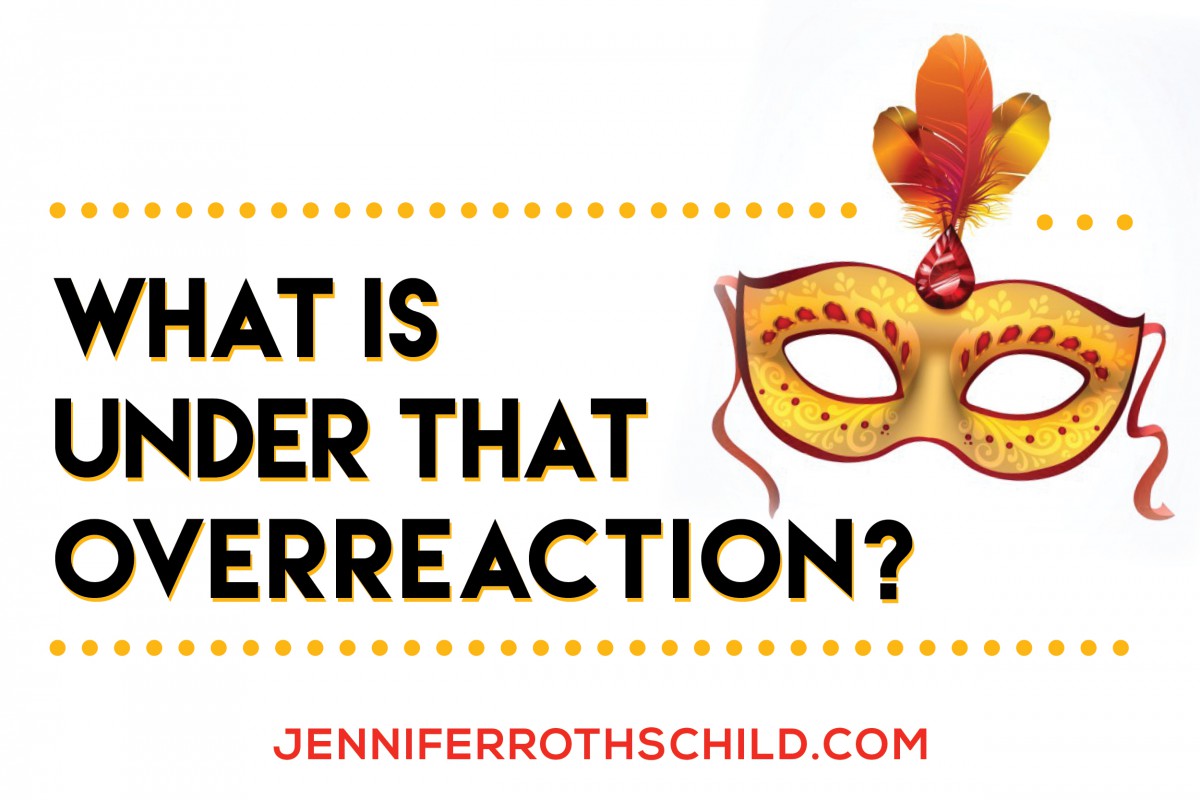 The sister was 2 seconds away from losing what was left of her cool.

The woman was rifling through her purse as she raised her voice in response to the cashier’s request for her credit card, “I gave you my blankety-blank card! I know I did!” The cashier, whom I’m sure was as red as a stop light, answered, “No, Ma’am, you didn’t.” The customer erupted, “Don’t use that tone of voice with me!”

At that point, I thought, “What tone of voice?”

The cashier sounded fine to me. The customer was the one who was rude, unkind, and way out-of-line.


There is always something under an overreaction.
[Click to Tweet]
I felt so badly for the shell-shocked cashier as she responded. “I didn’t think I used any tone of voice, I was just telling you…”

Like a sonic boom, the woman in front of me, who was yanking at her pockets for her lost card, demanded, “I will not be treated so rudely! I want your manager.”


We wear a mask of perfection to conceal our insecurity, fear, or low self-esteem.
[Click to Tweet]
Now, I thought, “Treated so rudely?” The cashier had not been rude at all.

The cashier turned to the rest of us in line and, with a trembling voice, suggested we move to another line. As I walked away, I heard the sparky customer flatly say, “Here is the blankety-blank card. Happy now?”

That is all she said. But, that is not all I heard.

The volatile woman said a lot more than words, her reactions said a lot about her.

She overreacted. And, there is always something under an overreaction.

When I overreact, it’s usually because something bumped into my insecurity. I overreact to cover where I feel vulnerable or inadequate. It reveals that I wear a mask.

I try to hide the flawed me behind my mask of perfection.

Do you ever do that?

We wear our masks to conceal our shadow of insecurity, or fear, or low self-esteem. We don’t mean to wear masks, and often, we don’t even know that we are wearing them. The mask is the perfect us — the one who is fine as long as everything is fine. But, if something goes wrong — like a misplaced credit card — then, the mask cracks and the insecure us we were trying to hide busts out in the form of a big overreaction.


To have healthy reactions we must be grounded in our identity in Christ.
[Click to Tweet]
Now, here’s the deal. You may not be an exploder like the female spark plug in line. You may think the sister in line with me was crazy for getting all shaken up over a missing card. If you can’t understand why she heard rudeness in a simple question from a cashier, it is probably because you don’t deal with the same stuff or have the same style as she does.

But, what if someone gives you the silent treatment and you plunge into a bottomless pit of self-evaluation or self-condemnation, that overreaction exposes a shadow lurking just below the surface of your seemingly secure self.

The point is this, sisters… every reaction has something underneath it.

For us to live with healthy reactions, we must have the foundation of our identity in Christ grounding us, giving us maturity and balance.

We won’t wear masks because we will have nothing to hide.

So, the next time you start to overreact, do some self-examination instead. You don’t need to hide behind a mask of perfection anyway… you are hidden in Christ, in His perfect love.


The next time you start to overreact, do some self-examination instead.
[Click to Tweet]
And, for you readers who are concerned or curious about the “blankety-blanks” that my fellow shopper spit out, she used words that were actually in the Bible! Use your imagination! Ha!

In the comments below, tell us how you tend to overreact and what you think may be under that overreaction.