I am not an expert on anger… 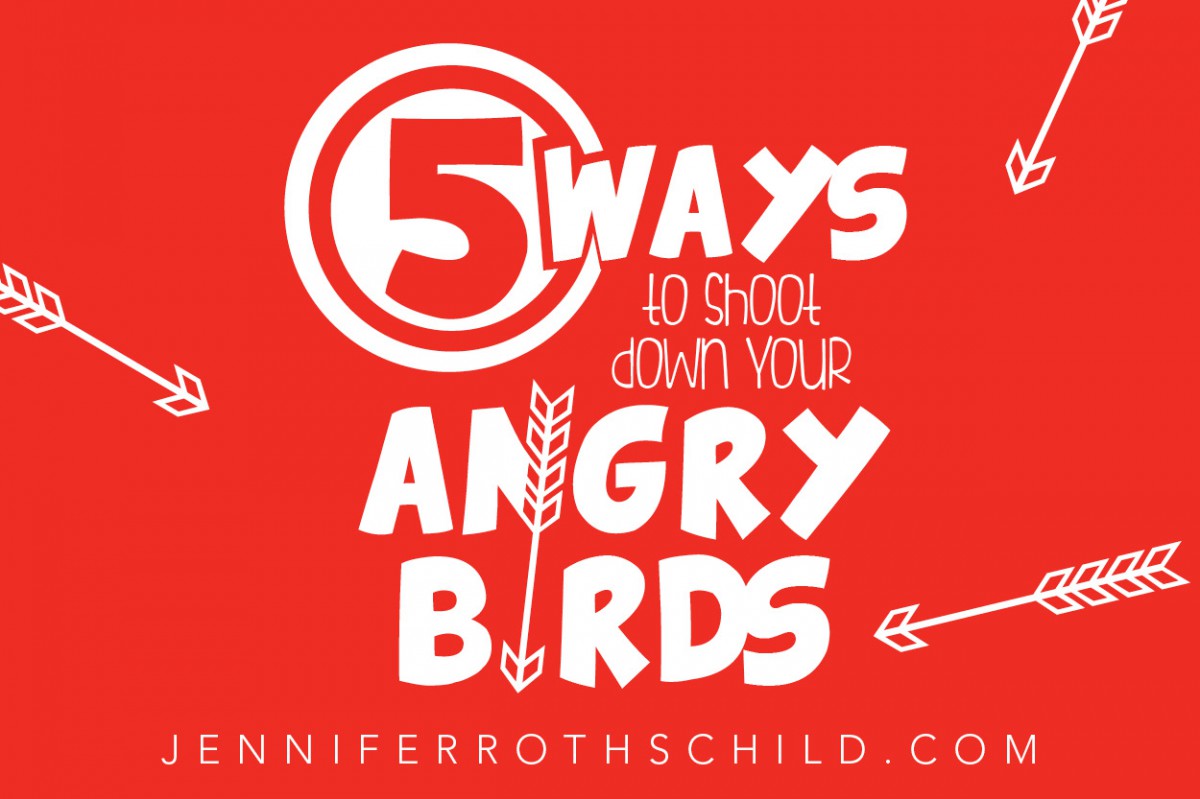 I just have a lot of experience with it — I mean A LOT!

When I am angry, I am not an explosion waiting to happen, but I am also not quick to turn the other cheek. I am somewhere in between — never knowing quite how to feel, what to say, or better yet, what not to say.

Please tell me I am not the only one who deals with this!

In case you have trouble knowing what to do when the angry “birds” start to fly, I have a few ideas — five actually.

When anger rises in you, it’s easy to rise up and make some noise! Rarely, do we swallow our pride and stay silent, and, we shouldn’t. But, we also don’t want to go to the other extreme and act out of control.

So, when you feel the anger start, STOP! Be still.

Take a moment to quiet your heart so you will have control over your anger rather than your anger having control over you. But, being still doesn’t mean you have to be silent. You need to speak the truth to the person, or situation. Being still gives you a chance to align your spirit with God’s so you can speak the truth in love. Scripture commands us to, “be still and know that He is God” (Psalm 46:10). When we are still it helps us rest in His control.

When the heat starts to rise, inspect the situation. Ask yourself, “Why am I angry? Is it warranted? Is my anger based on fact or speculation? Am I assuming the worst about this situation, or this person?”

Sometimes, instead of inspecting the situation, we invent a problem that doesn’t even exist by jumping the gun, assuming the worst, or being slow to hear someone out.

However, if we take a breath and inspect the situation and our own heart, we will be less likely to invent a problem or make a problem even bigger than the one that already exists.

A response is most often based on thought. A reaction is usually based on emotion.

When you’re mad, the emotion you’re feeling isn’t usually one that will lead to a mature reaction. So, when you start to fume, take a breath, be still, and inspect. That brief pause will give you time to shift from a reaction you may regret to a response that may resolve the situation.

It’s no accident that that thing that causes mass destruction is called a nuclear “reactor” rather than a nuclear “responder!”

A reaction tends to be self-centered; a response is usually other-centered.

5 Ways to Shoot Down Your Angry Birds
[Click to Tweet]
Some people deal with anger by stuffing it deep into their souls until they develop an ulcer and stay up all night with insomnia.

Find a way to lovingly confront, wisely work things out, and graciously forgive. Face it instead of avoiding it.

To feel angry isn’t a sin. If it were, the Bible wouldn’t tell us to be angry and sin not. But, we can dwell in our anger in such a way that it turns into sin. Sometimes, our anger feels good. We coddle it, justify it, feed it, and it grows. That anger grows until it becomes this ugly monster that devours us. And when that happens, we have crossed the line.

Sense it, feel it, experience it, but don’t cross the line into sin.

So, maybe the next time those angry “birds” start to fly, try these five ideas: Be Still, Inspect, Respond, Deal with your anger, and Sin not!

Question: What constructive ideas do you have for when you are angry?