If there was ever a poster girl for a woman with lots of issues, it’s the woman with the issue of blood whose story is in Mark 5. I know, I know, you thought I was going to say it was you, right?! It often feels like it could be me, too! 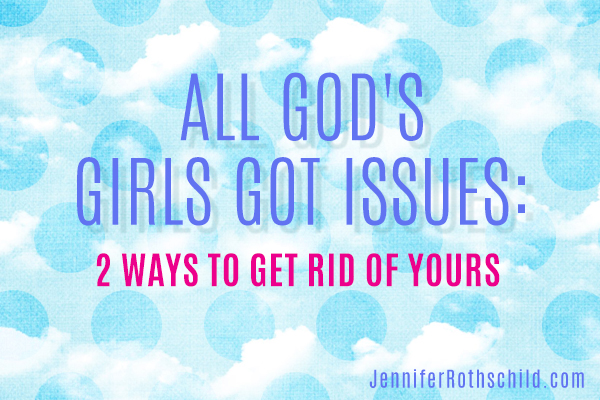 This woman lived thousands of years ago, but she is so much like us today. She had issues—actually one big issue- She had been hemorrhaging for twelve years. (v. 25, 26)

Can you even imagine that? This issue of “blood” as the King James Version phrases it was just the head waters from which all sorts of other tough issues flowed. She was most likely childless and unable to have a baby – a terribly painful issue. And, she was most likely poor, and that’s a discouraging issue. Plus, she was most likely lonely due to Jewish ceremonial law that kept her isolated – a destabilizing issue!

She had issues. I got issues. All God’s children got issues!

Loss, loneliness, financial strain, sadness, insecurity and illness are just a few of the issues we deal with. Our issues cause pain, discouragement and can make us emotionally, and spiritually unstable too.

So, what do we do with our issues?

This woman did two things with her issues which brought her soul healing, and I think we all can learn from her.

1.  First of all, this First Century woman spoke truth.

I do that, don’t you? But, she told herself the truth. Do you tell yourself the truth? When we have issues, we must speak truth to ourselves about our issues.

The woman knew healing was in Christ.

2.  The second thing the woman did was draw near to truth.

When that woman reached out for Jesus, she was reaching for Truth.

She was declaring her belief in the truth that He was the Son of Righteousness. You see, Jesus wore a prayer shawl that day. On each corner of the hem were tassels (also known as wings). The tassels represented the commandments of the Word of God.

The issue laden woman most likely knew  “…the sun of righteousness shall rise with healing in its wings.” Malachi 4:2. Her touch of the wings or tassels of Jesus’ garment was a proclamation that He was Messiah.  She not only spoke truth to her own soul about His ability to make her whole, she drew near to Truth – The Truth, The Way and The Life!

As you and I tackle our issues, we must first tell ourselves the truth and then press into The Truth, Jesus.

Your deepest issues are only dealt with when you make Truth your standard, foundation and ultimate goal.

Question: Can you relate to the woman in Mark 5?