One thing I can see clearly through blind eyes is that self-reliance is not all it’s cracked up to be.

I used to think that if I could just rely on myself – if I didn’t have to depend on others – then I would experience real freedom. 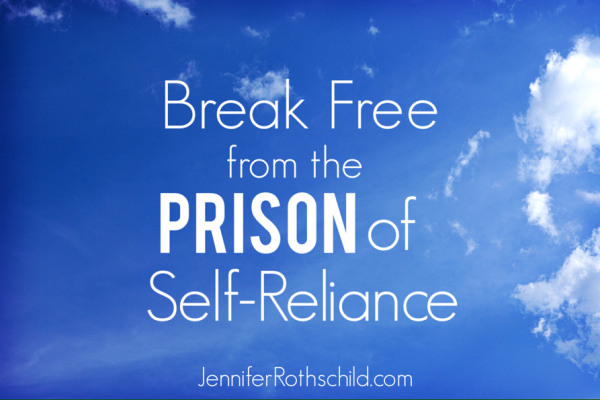 But, blindness just makes total self-reliance impossible. And, to be honest, sometimes dependence on others can feel like prison bars which keep me from the freedom of independence.

But, lately, I am learning that having to depend on God and others actually provides greater freedom.

Self-reliance can be a form of bondage.

Hard things in our lives can break us free from the prison of self-reliance… if we allow them to.

Hard things did that for the apostle Paul.


Life’s hard places can be an opportunity to get free from self-reliance and grow in God-reliance.
[Click to Tweet]
“We were crushed and overwhelmed beyond our ability to endure, and we thought we would never live through it. In fact, we expected to die.” (2 Corinthians 1:8-9 NLT) Doesn’t that kind of hardship sound like a dead end… a prison?

Evidently, Paul didn’t see it as a dead end… he saw it as a pathway to greater freedom. “But as a result, we stopped relying on ourselves and learned to rely only on God, who raises the dead… We have placed our confidence in Him, and He will continue to rescue us.” (v. 9-10)

Paul shows us life’s hard places can be an opportunity to get free from self-reliance and grow in God-reliance.

Paul described his hardship as “beyond his ability” to endure.


We have to admit that we can’t do life alone. It’s too heavy to carry by ourselves.
[Click to Tweet]
Whatever pressure he was dealing with became a stage upon which his own limitation was displayed. Heartache, pressure, and sorrow can do that for us too.

They don’t cause limitations, but rather they expose our limitations.

Sure, blindness presents limitations, but it also reveals a limitation in me that I have with or without blindness…

I can’t do life alone! It’s too heavy to carry by myself.

You can’t do life alone either.


We often try to act strong and independent, but not everything will be within our own ability.
[Click to Tweet]
We often try to act strong and treat every difficulty as if we are completely, independently able to manage it. But, sister, everything you deal with will not be within your own ability to handle.
So, just acknowledge it. It’s okay to have limitations. If you never acknowledge your need, it can never be met. If you play the Lone Ranger, you just stay hidden behind a mask.

Paul said that as a result of his suffering and his inability to do it on his own, he stopped relying on himself. He got free!

There is freedom when we stop trying to hold it all together and just let God hold us.
[Click to Tweet]
He was free to depend on God and others.

Of course, we can have confidence in who God made us and how He works in us. But, if we rely on ourselves, in exclusion of reliance on God and others, we isolate ourselves.

We end up in solitary confinement – a prison of our own making.

So, don’t do that, sister! Stop being the Lone Ranger! Pull off the mask, send Tonto home, and reach a trusting hand toward Heaven.

Paul regarded depending on God as a learning process.


Break the chains of independence that have isolated us from God and others.
[Click to Tweet]
He wrote, “We stopped relying on ourselves and learned to rely only on God.” Depending on God isn’t automatic. Dependence is learned. We learn about it, study it, and practice it to really become an expert. Wouldn’t you like to be an expert when it comes to relying on God? Oh, me too sister!

There is freedom when we stop trying to hold it all together and just let God hold us.

If we rely on ourselves, in exclusion of reliance on God and others, we isolate ourselves.
[Click to Tweet]
Lord, teach us to rely on you completely. Break the chains of independence that have isolated us from you and each other. Let our suffering introduce us to freedom — the freedom to rely fully on You. Amen.

Fill the comments below with your prayer asking God to free you from the chains of self-reliance and “like” each other’s comments so all the sisters know we are praying for freedom for each other.