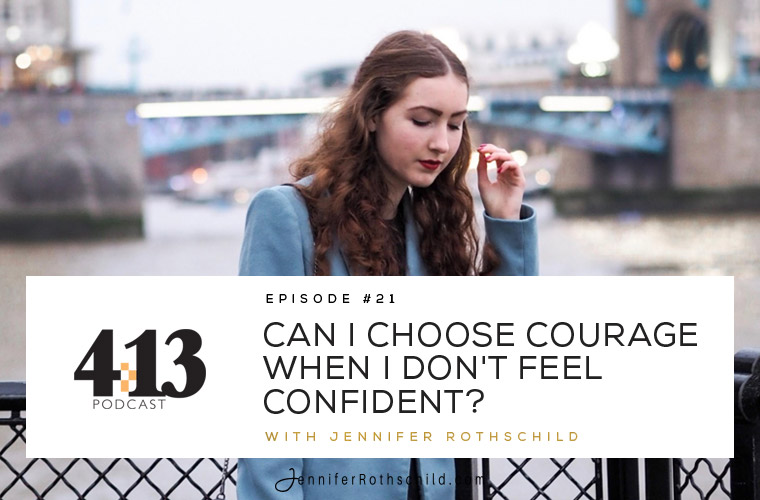 A few years ago, I was a speaker on the Women of Faith tour.

Each event was held in an arena and the stage was always in the round. When it was the other speakers’ turn to share, they would skillfully navigate the stage, walking around the entire perimeter so they could engage the audience.

I didn’t want to just hover in the middle of the stage, though. I wanted to engage the audience in a similar way. So, my husband, Phil, and the crew got creative.

Here’s what they did.

Courage and confidence are not the same thing. Confidence is a feeling, but courage is a choice. [Click to Tweet]

Right before it was my turn to speak, the crew would quickly lay out four rugs in the shape of a plus sign. At the end of each rug was a sound monitor. So, I’d start in the center of the stage and use the feeling of those rugs under my feet as a guide. And, once I neared the end of a rug, I’d hear my voice in one of the monitors. This would cue me to shimmy back a little bit and walk to my left until I hit the next rug.

I remember one time I was sitting on the front row after speaking. Lucy Swindoll was on stage and I heard her say, “I just admire Jennifer Rothschild’s confidence.”

As she said that, I thought, “Sister, I have no confidence. You don’t understand, I got zilcho confidence.”

Maybe you feel that way today too. Perhaps, like me, you feel a little shaky in the confidence department sometimes. If that’s you, let me tell you what I realized that day Lucy Swindoll called me confident. What she was really commenting on was my courage.

And, friend, no matter what you face, you can choose courage too.

On this episode of the 4:13 Podcast, KC and I talk about how confidence is a feeling, but courage is a choice. You’ll learn how four people in the Bible that we consider spiritual rock stars lacked confidence, but acted with courage anyway. Plus, we’ll give you a couple practical ways you can live a courageous life, as well as a free lock screen download to encourage you.

4 Spiritual Rock Stars Who Had Courage

You are in good company if you lack a little confidence. You walk in the footsteps of those who shook in their sandals! They may seem like spiritual rock stars, but they were just like you.

2 Ways You Can Step Out in Courage

What is one way you will choose to have courage this week? Share in the comments.

Comment | Share | Tweet | Pin It | print | email
Categories: Blog, Podcast, The Blind Side
Disclosure of Material Connection: Some of the links in the post above are “affiliate links.” This means if you click on the link and purchase the item, I will receive an affiliate commission. Regardless, I only recommend products or services I use personally and believe will add value to my readers. I am disclosing this in accordance with the Federal Trade Commission’s 16 CFR, Part 255: “Guides Concerning the Use of Endorsements and Testimonials in Advertising.”