“I look awful, enormous and disgusting in this dress. I would rather die than be seen in public wearing this horrible piece of fabric.”

That’s what I overheard in the dressing room next to mine as I tried on a pair of jeans. 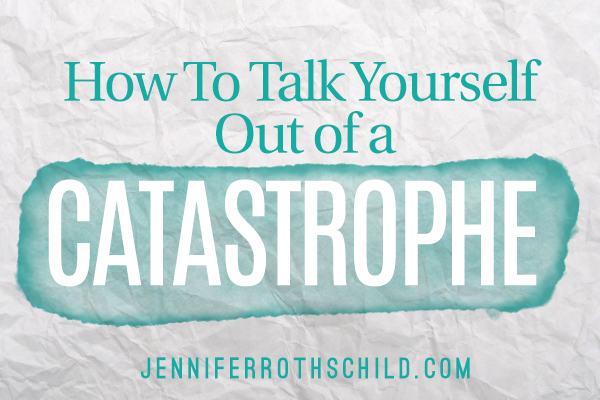 I grinned knowingly because I’ve been there, have you?  I have thought similar thoughts and used similar words for similar reasons.

I guarantee that the woman wearing the ugly dress in the fitting room next to mine wasn’t feeling very peaceful at the moment.

But, there are some words that we need to subtract from our vocabulary because they take away from the peacefulness of our lives.

I call those words Catastrophisms.

The unhappy anonymous Mama on the other side of the modesty curtain was a running stream of overly dramatic, stress-infusing, catastrophisms.

My shoulders got tight just listening to her!

Catostrophisms are big emotional words which we misuse by applying them to small events.

Some examples of catastrophisms are “horrible,” “awful” “miserable,” or “excruciating.”

For instance, if I had a slight headache and said it was excruciating, that would be an extreme word applied to a small event.  If my food wasn’t flavorful and needed some seasoning and I called it horrible, that would be using a “Catastrophism.” Or if I tried on a dress that I didn’t like and called it “awful, disgusting and said I looked horrible, then I would be using the mother load of catastrophisms!

Those examples are of events and situations that are really no big deal, right? But when we routinely choose those kinds of extreme words and apply them to our situations, we charge the situation with emotions that just don’t fit. We do this with our relationships, our work and our experiences, and we set ourselves up for a lot of stress.  If everything is a catastrophe, then we really will feel “horrible,” “awful” “miserable,” and our lives will be “excruciating.”

I don’t know about you, but I don’t want to be that kind of Drama Mama!

A Drama Mama creates her own sense of catastrophe by how she labels things. Something may be bad, but that doesn’t mean it’s horrible. Call it what it is rather than making it worse than it is.

In doing so, you will reduce your stress and add to your peacefulness. (And, you will add to the peacefulness of your family, friends and the woman who may be trying on jeans in the fitting room next to yours!)

So, if you want more peace, lose a few extreme words.  But, that doesn’t mean you have to extract all extreme words from your vocabulary.   Just use them appropriately.   If you happen to have a Drama Mama moment, and call your next headache, “excruciating,” don’t fret.  It won’t be a catastrophe if an occasional catastrophism slips out!! Just take some Tylenol and move on!

What kind of Catastrophisms—extreme words—would you like to use less often?