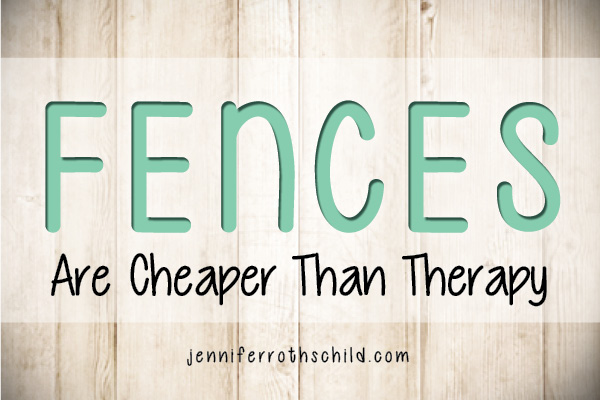 It’s true. But, I know something else good fences make… good mental health! Let me explain.

We have an adorable little Shih Tzu named Lucy.

She is a furry little dust mop of a creature with a striking white and black patterned coat. As she has matured, she has become increasingly curious about her surroundings. Our backyard has lost its appeal and she has been stricken with wanderlust lately.

Because we know she has this wayward potential, she is always on the end of a leash – most of the time with a human attached to the other end. But, as Spring arrived, she wanted to be out far more than we humans could afford, so we attached the end of her leash to various items in the backyard. She has been tethered to the wrought-iron bench under the oak tree. She has been connected to the post on the back porch. Her leash has even been tied to the garden hose. She especially likes the hose because it gives her a lot more mobility.

She is happiest when she can wander like a vagabond around the neighborhood, but a close substitute is being secured to something in our backyard while she tunnels into the moist dirt searching for worms. She emerges with a content, dirty, gray beard covering her lovely black and white finish. But, at least we can locate her!

I asserted our need for a fence since she was about 3 months old and my request consistently fell upon the rocky soil of excuses; low budgets, tree removal costs, bad weather and ruining the look of the backyard. These are just a few of the supposed reasons my request had not taken root, keeping us from erecting the boundary of bliss.

But, I was getting to the point of insanity!

If I wasn’t outside with Lucy on a leash, I was listening to her exude the most pitiful, mournful and disturbing moans as she peered out the back door. She sounded as if she would whine herself into pandemonium if she didn’t escape into the great outdoors.

So, once again, I mentioned to Phil, “We must get a fence. I can’t take this whining, begging and constant taking her out much longer.” (I was secretly hoping he couldn’t take much more of my whining and begging either!) He muttered another excuse that would buy him a few months of indecision, stroked the dog and said, “Lucy, you be a good girl.” Then, it was off to work for him and back to the leash for me.

I resigned to my fate once again.

I took the little whining moppy girl into the backyard. I decided to tie her leash to the end of the garden hose, told her to have fun, and went back inside.

After about a half hour, I got a phone call. It was not unlike phone calls I have received in the past… “Ma’am, I think I found your dog.” My first instinct was to say, “No, she’s in the backyard.” But, instead, I listened to the account of Lucy being found in this lady’s garage attached to a garden hose.

I was apologetic and mortified and sent our son to retrieve her.

I was baffled that she could have pulled the hose from the side of the house. I imagined her maneuvering her hairy body under the faucet, twisting herself into pretzel-like motions and somehow managing to unscrew the hose from the faucet! So, while Connor was getting the dog back, I examined and realized the hose was actually attached to the faucet. I was utterly confused and, of course, my thought gravitated to the fence we did not have and, obviously, were not getting soon enough!

While I was doing my garden hose detective work, along came Connor and happy-go-lucky Lucy with a leash and garden hose attached to her collar. She was too cute and tangled to scold, so I unattached her and sent her inside.

So, Lucy wandering the neighborhood with a 12 foot hose around her neck made her the Rothschild ambassador of irresponsibility. She was now decreeing to the neighborhood that we were disorganized, inattentive and just plain weird! Who leashes their dog to an unattached garden hose and, then, lets her roam the neighborhood?! Ugh.

Believe me, a fence is cheaper than therapy!

Question: What, in your life, keeps you sane?