I got a lovely tea chest full of interesting and exotic teas. 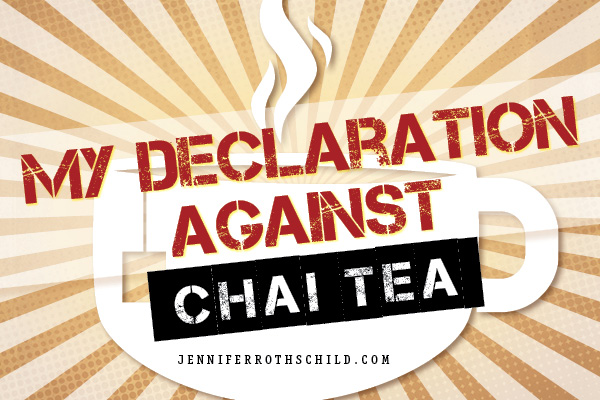 I was anxious to sample all of them. After all, all I usually drink is black tea. Boring black tea – the blacker, the better. But this tea trunk had Chai in it. “Hmmm…” I thought, “sophisticated people drink this stuff. Perhaps, I’m uncultured to not drink this stuff.”

Chai just sounds like the nectar of the trendy and educated. So, I boiled the water, poured it into my favorite mug and slipped in a tidy little bag. The aroma wafted. It was just a little spicy.

“This is promising,” I thought.

I let it steep a while (since I like my tea like my husband… strong and hot! Ha!)

I eagerly removed the bag, lifted my chin slightly (so I’d look chic enough to drink) and then drew the cup toward my unworthy lips. Just the fragrance made me feel like the sipping elite. Those addicts at Starbucks who use way too many adjectives to order their coffee had nothing on me!

I sipped. I swallowed. I gulped down the unattractive truth that I was not chic. It was awful!

I was about to be kicked out of the Cool Tea Drinker’s club and I really like to fit in. So, I scrambled to fix the situation.

“Maybe it needs some sugar.” I put in a spoonful.

“Maybe it needs more sugar.” I tilted the sugar bowl and it avalanched into my mug. Uck!

I sipped. I gagged. I added more cream.

“Maybe it’s not hot enough.” I microwaved it for 30 seconds.


My Declaration Against Chai Tea [Click to Tweet]
Finally, I came to the conclusion I don’t like Chai tea! I think Chai tea tastes like my spice rack fell into the pond in my backyard and someone squirted food coloring into it, scooped it into a nifty carafe and told everyone it was tea. Then, they gave it a funky sleek name, and charged $5 for it at a trendy café!

Chai tea is like Sushi… cool people partake of them. I want to be cool, but not bad enough to swallow that stuff! I actually prefer cornbread, beans, and greens from Cracker Barrel! And, I know that’s not very sophisticated!

So, here’s a cup of courage for you… admit it.

Question: What have you had the courage to admit lately?

Comment | Share | Tweet | Pin It | print | email
Category: Spill the Beans
Disclosure of Material Connection: Some of the links in the post above are “affiliate links.” This means if you click on the link and purchase the item, I will receive an affiliate commission. Regardless, I only recommend products or services I use personally and believe will add value to my readers. I am disclosing this in accordance with the Federal Trade Commission’s 16 CFR, Part 255: “Guides Concerning the Use of Endorsements and Testimonials in Advertising.”