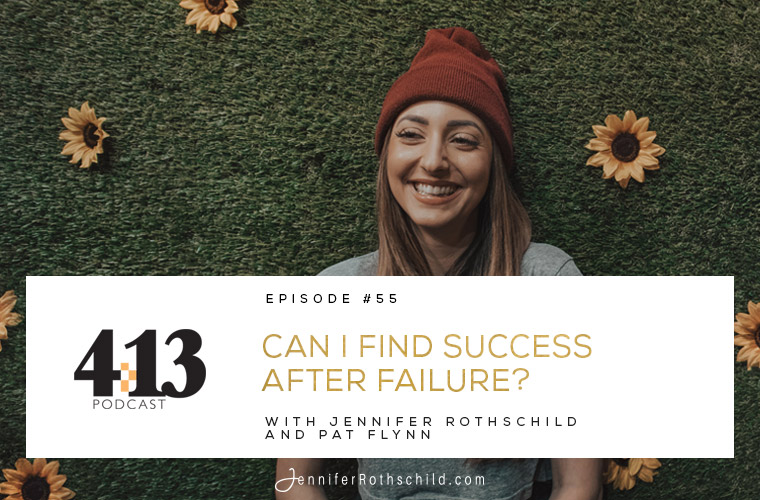 One afternoon, first-grader Hannah came home from school after a long day of testing.

It was Hannah’s first experience with standardized testing, and her response was tentative.

So Joni asked her daughter a few more questions. It turns out that after Hannah wrote her name at the top of the test booklet, her teacher had come by and marked an F under her name next to the word sex.

“Honey,” Joni said, “the F stands for female—not fail! They just wanted to know whether you’re a girl or a boy. You’re a girl, so your sex is female.”

Hannah heaved a sigh of relief, and they both laughed.

Even though Hannah didn’t fail her test, failure happens to all of us at some point, doesn’t it?

You might be dealing with failure right now. It could be that you’ve hit a dead-end and it feels like you’re at the end. Maybe you just can’t fathom how you’ll ever find success again.

If that’s you, you’re going to love today’s 4:13 Podcast conversation with author and podcaster, Pat Flynn. You see, even though Pat is successful now, he knows what it’s like to fail.

Several years ago, Pat was fired from his dream job as an architect. But, instead of giving up, this unexpected failure became the beginning of a whole new path of success for him. He poured his time and energy into using his knowledge and skillset to help others. Sister, you’re going to be inspired by what happened next!

Today, Pat is a father, husband, and entrepreneur who lives and works in San Diego, California. He owns several successful online businesses and is a professional blogger, keynote speaker, Wall Street Journal best-selling author, and host of the Smart Passive Income and Ask Pat 2.0 podcasts, which have over 55 million downloads.

So pull up a chair! This episode is warm, wise, and practical. Whether you’re in business or ministry, you’re going to learn how failure can be a stepping stone to success and discover the power of authentically connecting and caring for others.

3 Ways to Find Success After Failure

Friends, you too can find success after failure. Whatever you face, whatever your calling is in this life, you can do it! You can win this day. You can do all things through Christ who gives you strength.

From what Pat shared, what tip or word of advice did you find most helpful?