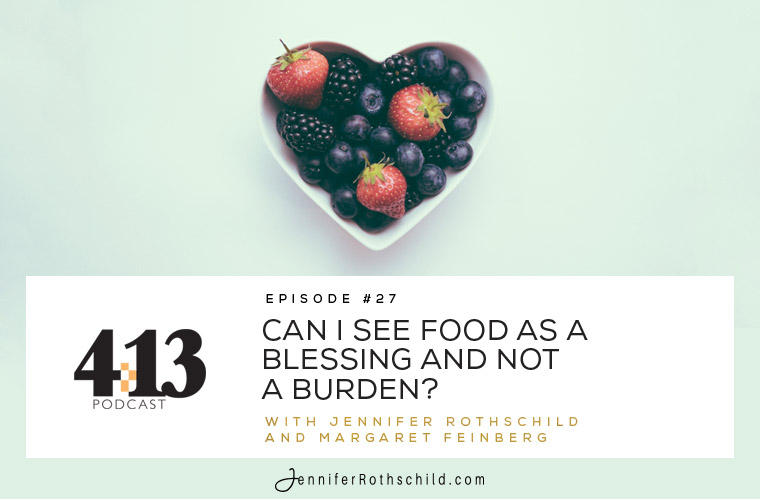 It was January of 1989 as my friend, Darlene, and I stood in the kitchen. We were focused on a little stick that would tell us whether or not I was pregnant.

I was a mix of emotions—nervous, worried, hopeful, anxious, and insecure.

So, as we waited, I opened a bag of mini Heath candy bars. One-by-one, I unwrapped them and, with every bite, I felt a little better. I was distracted and enjoying that toffee crunch and chocolate.

By the time the stick turned blue, I had eaten half the bag!

When Darlene gasped and told me I was pregnant, we jumped up and down. Then, after my feet landed solidly on the kitchen floor, I tore open the remaining Heath bars and ate every last one!

I was eating because I was happy, nervous, and stressed. I truly could accompany any emotion I was feeling with a Heath bar, and somehow, I felt comforted.

If your relationship with food is complicated, here’s how you can see the table as a place of sacredness instead of shame. [Click to Tweet]

Sister, I was a classic emotional eater.

Maybe you can relate. Like me, it could be that you too have found yourself eating for comfort. Or, perhaps you’ve struggled with food in other ways and, as a result, you have a complicated and conflicted relationship with it.

If that’s you, pull up a chair! You are going to love today’s 4:13 Podcast guest, Margaret Feinberg.

Margaret is a Bible teacher and speaker. You may have heard her at Fresh Grounded Faith, Catalyst, or Women of Joy. She lives in Salt Lake City with her husband, Leif, and their super pup, Hershey.

Here are four foods in the Bible that will give you a greater appetite to taste and see how good God is. [Click to Tweet]

She’s also the author of the book, Taste and See: Finding God Among Butchers, Bakers, and Fresh Food Makers. And, today, she’s going to help you and I better understand God’s intention for what we eat and why we eat it.

So, if food has been a battleground for you and a source of shame, the insights Margaret shares will bring freedom! You’ll learn how to start approaching the table as the sacred place God intended it to be.

“Taste and See” Foods in Scripture

Here are several foods in the Bible that will give you a greater appetite to taste and see how good God is.

No matter what your relationship with food has been, today you can start to move from a place of shame to sacredness. Remember, no matter what you face or how you feel, you can do all things through Christ who gives you strength!

*** You can hear from amazing women like Margaret at a Fresh Grounded Faith event near you! Find an FGF in your area here.

Additional Links Mentioned in the Episode

What is one new thing you learned about food from listening to this podcast? Share in the comments about how it’s better helping you taste and see God’s goodness.