When my son Connor was six years old, he wrote a hilarious Christmas wish list.

I still remember his creativity and boldness in choosing the many, many, many, many items. I smile when I think back to the wintery day he asked to get out my laptop and type out his Christmas list for him. He stayed serious and thoughtful as he dictated each item. 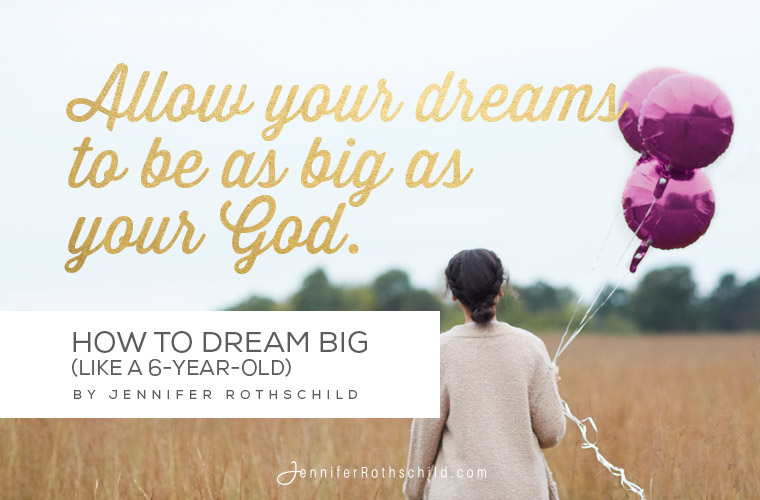 When I found it recently, I laughed out loud and thought you may get a kick out of it too.

– Hovercraft that you can ride on

– Scooter that has a fire boost

I would love to dream like that from time to time. Wouldn’t it be enchanting to live with that kind of wonder and sense of potential? I want to be led by pure joy and creativity rather than self-imposed limits and small thinking. Don’t you?

What if we all learned to dream again like we did when we were six?

What if, this coming year, you jotted down a wish list and handed it to God in prayer? What if you were creative and bold? What would your list look like?

C.S. Lewis once wrote: “It would seem that Our Lord finds our desires not too strong, but too weak. We are half-hearted creatures, fooling about with drink and sex and ambition when infinite joy is offered us, like an ignorant child who wants to go on making mud pies in a slum because he cannot imagine what is meant by the offer of a holiday at the sea. We are far too easily pleased.”

Do you live “far too easily pleased?” The reason Connor was willing to ask for a dinosaur bone, a fake fire ball, $69 for “stuff” and a hovercraft is because no one told him those things were beyond the reach of his imagination and his parents’ desire to bless him.

My friend, nothing is out of God’s realm of ability and no request is beyond His desire to bless you.

So, wanna learn how to dream like a six-year-old?

Tell logic to take a day off every now and then! Allow your dreams to be as big as your God. Stop writing out your life story with an old, worn down brown crayon.

Instead, pull out the red, blue, green and purple and do something creative and bold with yourself! Dream like a six-year-old and you will grow in your faith and get younger and younger as you age.

What would you ask God if you were bold and creative?

Comment | Share | Tweet | Pin It | print | email
Categories: Blog, My Thought Closet, Taste This
Disclosure of Material Connection: Some of the links in the post above are “affiliate links.” This means if you click on the link and purchase the item, I will receive an affiliate commission. Regardless, I only recommend products or services I use personally and believe will add value to my readers. I am disclosing this in accordance with the Federal Trade Commission’s 16 CFR, Part 255: “Guides Concerning the Use of Endorsements and Testimonials in Advertising.”