I only had 30 minutes between flights. That’s a pretty tight layover even when you’re seated in the first row of the plane and able to get off first. It’s tight even if you can see and run like a sprinter through an airport. But, when you’re blind, have to wait for airport assistance and are stuck in the back of the plane … well … 30 minutes is almost impossible. 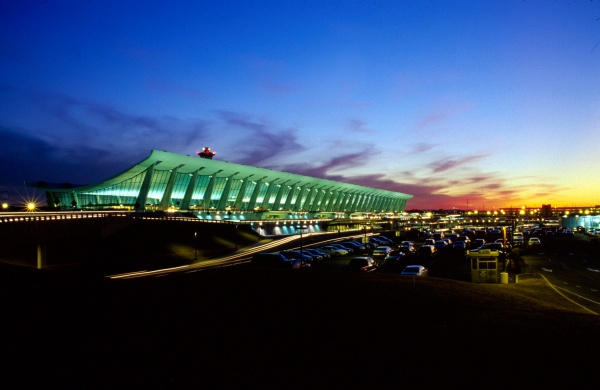 So, as we taxied in, I knew there was only a small chance I would make my next flight. I signaled the flight attendant and told her my situation and asked, “I know it’s your policy for those needing assistance to get off the plane last, but can you walk me out as soon as we land so I can make my next flight?”

She told me she would if she could but she had to stay on the plane. The lady seated next to me overheard and said, “I’d be happy to walk you off the plane if that would help.”

I thanked her and told her that someone from the airport would be there to whisk me off to my next gate.

The seat belt signal dinged, a series of unfastening clicking filled the plane, and my seat buddy and I sprung from our seats and headed for the door.

We made it out to the jet bridge but there was no one to take me to my gate. An airline representative saw me and reassured me the airport staff member as on his way.

One minute, two minutes.
I inquired to the representative. She called again.
“They are on their way ma’am,” she promised.

Three minutes, four minutes.
Passengers were streaming out the airplane door and down the jet bridge.

“Ma’am, is there anything we can do? I am going to miss my plane,” I said to the woman who had been reassuring me. “I don’t know what to tell you; I called him.”
She called again.

Nine minutes, ten minutes.
At that point, I was trying to relax and accept that I would miss my flight.

And then, he arrived.

A happy man named Stephen introduced himself and asked me to sit in a wheelchair. I don’t usually use wheelchairs since my legs work fine (and I’m a fast walker!), but I sat.

“Stephen, my flight leaves in 20 minutes and it’s in the next concourse.” He moaned like this wasn’t going to end well. I went into cheerleader mode. “You can do it! Speed if you have to. I really need to catch that flight. Can you help me out?”

He laughed and started singing as we rolled.

“God is good all the time,” he sang. “Hey lady,” he called out as he passed fellow employees. “How y’all doin’ this fine day?”

Sometimes the best thing we can do – regardless of circumstance – is to dance. Throw up your hands and do a little boogie. [Click to Tweet]

I reminded him he was my hero, he could do it, and I needed him to.

I thought of telling him I would give him a big whopper of a tip but instead I answered, “I’m gonna dance!”

We sped, as he called out “excuse me” to other passengers.

With as cheerful a voice as I could muster, knowing we had come to a stop and we probably were too late, I said, “Dance anyway.”

He said, “Well, get up and boogie while I sing because here we are!”

I sprang out of my chair, grabbed his hands and we did some kind of awkward blind woman with a complete stranger boogie! We just kinda jumped and he kept repeating the phrase of the song he’d been singing, “God is good!”

“Yes He is, Stephen!” I thanked God for Stephen as I buckled my seatbelt in seat 5A. The plane took off and I wiped the sweat off my face! Whew! It was a close one.

But, it was a good one because it reminded me we don’t just dance when things go our way; we dance anyway. Regardless of circumstance, feelings, outcomes … we dance anyway. And think how much more joy there is when we’re always ready to dance!

So, put on your dancin’ shoes my friend … it’s boogie time! This just might be the day you dance!

Question: How can you choose to dance today?

Share | Tweet | Pin It | print | email
Categories: My Thought Closet, The Blind Side
Disclosure of Material Connection: Some of the links in the post above are “affiliate links.” This means if you click on the link and purchase the item, I will receive an affiliate commission. Regardless, I only recommend products or services I use personally and believe will add value to my readers. I am disclosing this in accordance with the Federal Trade Commission’s 16 CFR, Part 255: “Guides Concerning the Use of Endorsements and Testimonials in Advertising.”