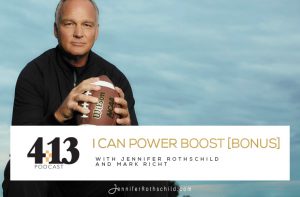 I Can Power Boost with Mark Richt [Part 1]

I Can Power Boost with Mark Richt [Part 2]

GIVEAWAY ALERT: You can win the book Make the Call: Game-Day Wisdom for Life’s Defining Moments by this week’s podcast guest. Keep reading to find out how!

Hey, 4:13ers! Heads up! This is another amazing “I Can Power Boost” episode.

And this time, I have not just one, but two, podcast episodes with none other than the award-winning college head football coach, Mark Richt!

On these two “I Can Power Boost” episodes, Coach Mark Richt shares his story of faith and football. You’ll get to hear the inside scoop of how Florida State University coach Bobby Bowden led him to Christ, and how Coach Richt balanced the 24/7 job of coaching with family time.

But the most powerful part of this conversation to me is what he says about his recent diagnosis of Parkinson’s disease. You are about to be totally inspired!

You may already know him, but here’s his official intro along with some great quotes from him that I call “Power Boosters.”

Coach Richt is also a philanthropist and motivational speaker, and he and his wife, Katharyn, have four grown kids and two grandkids.

His accomplishments could take an hour to recite, but knowing Mark, he would rather get to what matters most to him … and that’s what you will hear in this candid conversation from his home in Athens, Georgia.

My hubby, Phil, and I have been dear friends with Mark and Kathryn for 30 years. I’ve seen him behind the scenes and can say that he is exactly who he seems to be. He lives what he says, and I can’t wait for you to get to know him too!

So, enjoy listening to these bonus episodes, and enjoy reading these great power boosting quotes from Coach Richt.

More “I Can Power Boost” Episodes