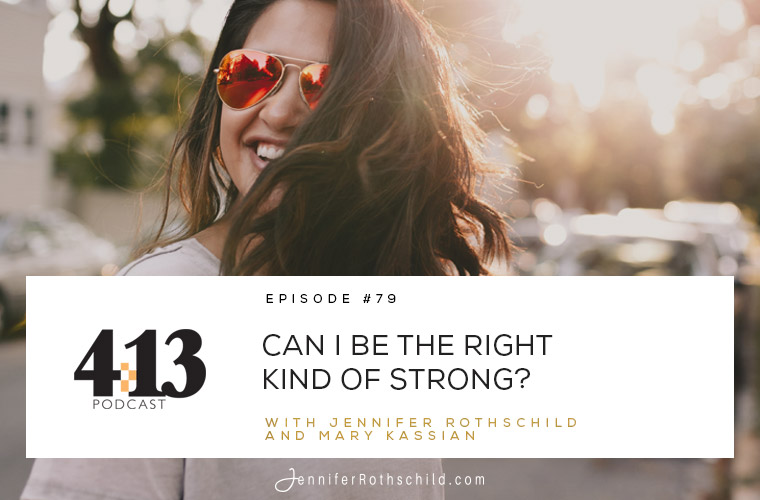 You and I hear all the time how important it is for women to be strong. Well, friend, the Bible agrees! Proverbs even gives us a picture of a strong woman. It says, “she clothes herself with strength and dignity” (Proverbs 31:25).

But, how can you know what that kind of strength looks like in a practical, day-to-day way?

On this episode of the 4:13 Podcast, we modern-day women are going to turn to the age-old wisdom of the Bible to discover how to be the right kind of strong. You’ll learn seven habits of a strong woman—and author Mary Kassian is here to guide you through it.

Mary Kassian is an award-winning author, popular speaker, and a distinguished professor of women’s studies at Southern Baptist Seminary. She has published several books, Bible studies, and videos, including Girls Gone Wise, The Feminist Mistake, and her newest book which we’re talking about today, The Right Kind of Strong.

Like me, she’s also a boymom and has spent endless hours on bleachers and in stadiums cheering on her guys. Mary’s got a cat named Miss Kitty and a lab named General Bo. And today, she’s a 4:13er!

So, strong women, pour your strong coffee. You’re going to love this conversation! It’ll clear up any confusion you may have about what it means to be a strong woman.

7 Habits of a Strong Woman

The wrong kind of habits can zap your strength! As Mary unpacks Paul’s teaching in 2 Timothy about the women in the church in Ephesus, she uncovers seven biblical habits that help you develop the right kind of strong.

Friend, if you want to be the right kind of strong, remember that strength doesn’t happen overnight. So, start small and depend on God for one thing. Then, do it again. Trust Him to grow you in one area of your life, then trust Him again for something else you need. That’s how your strength will grow. As Mary said, “When we walk with Jesus on a daily basis, that is how we become strong.”

And remember, wherever you are, however you feel, whatever you are dealing with, you can do all things through Christ who gives you strength.