As a kid, I did whatever I could to avoid eating Brussels sprouts. This was tough because my mom had a no-exception policy that each child had to eat each item on our dinner plates – at least one bite. 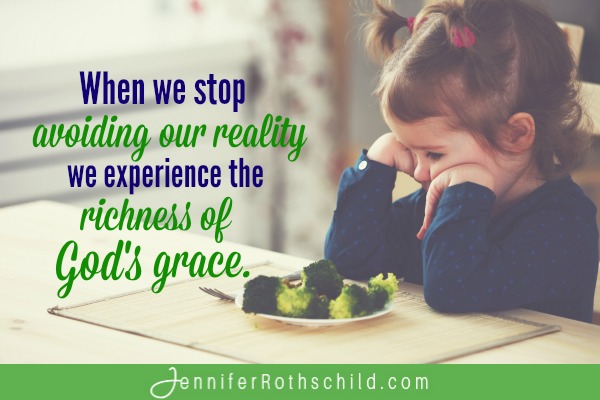 So, in order to avoid the inevitable for as long as I could, I ate the chicken first. I then slowly ate the rice – one grain at a time! But, eventually, there they sat – lonely and looming on my plate.

Brussels sprouts wouldn’t disappear or shrink just because I didn’t like them; just because I avoided them. I just had to accept the hard reality I couldn’t avoid, take a deep breath, plug my nose and swallow!

I admit my Brussels sprouts secret to you because of what it represents — there are just some things in life we flat-out don’t like.

Sometimes we do what we can to avoid the hard stuff all together. You know, leave a hard relationship or quit a difficult job. But, then there’s the unavoidable — you know, like cancer or bankruptcy or abandonment or, for me, blindness. When we can’t avoid the “Brussles sprouts,” we often will avoid fully engaging it — you know, we deny it hurts or distract ourselves from the discomfort it brings.

But the truth is, avoiding reality doesn’t change reality.

C.S. Lewis made a “treaty with reality” to deal with his most unpleasant memories or difficult times.

He first created it just to keep his sanity during World War 1. He wrote, “I put the war on one side to a degree which some people will think shameful and some incredible. Others will call it a flight from reality. I maintain that it was rather a treaty with reality, the fixing of a frontier.”

He couldn’t avoid the war – it was a reality beyond his control. And, as a boy, he lost his mother to cancer – a reality he couldn’t avoid. But, he sure wished he could. “I had always wanted, above all things, not to be ‘interfered with.’ I had been far more anxious to avoid suffering than to achieve delight. I had always aimed at limited liabilities.”

I get that, don’t you? We would rather avoid suffering than experience it. But, let’s face it, most of the time, we don’t have a choice. We can’t avoid it. And neither could Lewis.

Perhaps that’s why he finally made a treaty with reality? Perhaps that is why you should too?

I know that may seem silly to actually write it out, but, you may need to do it too. If you draw up the terms of your treaty with reality, it helps you come to terms with reality.

Do you need a treaty with reality?

Until you come to an understanding with the reality you would rather avoid, it will act as your enemy – that dark thing that is always looming at the edge of contentment. It will try to convince you that God isn’t good and doesn’t see what you’re dealing with. It will scare you into thinking that the only way to survive heartache is to avoid it. But, when you avoid reality, you don’t experience the richness of God’s grace.

Oh my friend, your life will be so much better if you just stop, sit down across the table from those “Brussel sprouts,” and make a treaty with them.

Lord, please help me to embrace what I can’t avoid. Help me to see what you have allowed as an instrument for my growth. I surrender my demand for reality to change. Please use my treaty to bring me closer to fully living in the territory you have allowed. Empower me to not just survive, but to thrive in this territory without missing any joy or becoming overwhelmed by any sorrow. If my past avoidance or denial has turned my unpleasant reality into a weapon against me, make it into an instrument – one that will be used to bring beauty back into my life. Amen.

So, what reality do you need to make a treaty with?