Our body language tells our secrets even when we think we’ve got them all under wraps! For example, body language experts say that when women feel shame, they may become small in posture by slouching or turning away. They may avert their eyes, kind of like a baby covering her own eyes and imagining she’s hiding. The experts describe the body language of shame as an attempt to be invisible or an effort to hide. 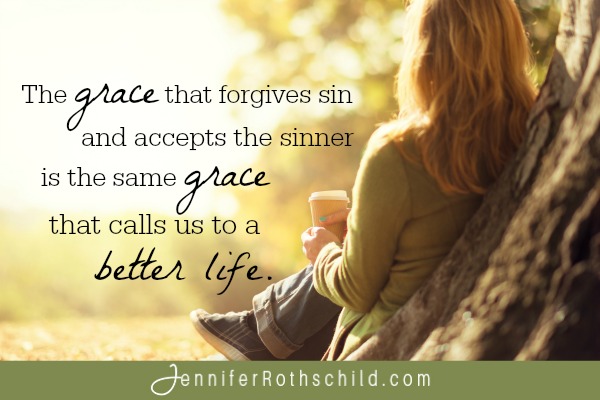 Wishing she was invisible?  Longing to hide? That has to be exactly how the woman who had been caught in adultery felt when she stood before Jesus.Jesus had been teaching in the temple when some scribes and Pharisees dragged in a woman who was caught in the act of adultery and set her in the
center of the court.

If she was caught in the “very act,” it doesn’t take much imagination to conclude that the poor woman probably wasn’t fully dressed and there she stood — exposed, alone, and isolated.

That’s what shame does. It sets us in the center of our thoughts and makes us feel like we are the only one.

Shame scolds: I am so stupid. When will I ever learn?

Shame separates. It isolates you from truth and makes you feel worthless. No wonder a woman who feels shame wants to hide.

Here’s a way to tell the difference between guilt and shame: guilt is a result of conviction which will lead to coming clean and receiving forgiveness. Shame brings condemnation that leads to further isolation and self-contempt.

Often we feel guilt because we’ve sinned. We’ve been “caught in the very act of” well, fill in the blank! (lying, stealing, gossiping, etc.) We feel convicted that we did something wrong and need  to come clean and receive forgiveness.

But, sometimes we feel shame when we’re caught in the very act of being human! (Disappointing others, failing a test, forgetting an appointment, etc.) We feel condemnation and want to cover up and hide.

The woman who stood before Jesus in John 8 surely felt guilt.  She had sinned. But, she also probably felt a depth of shame that was there long before she sinned that day.

When Jesus saw the woman standing before covered with nothing but guilt and shame, He didn’t condemn her. He covered her with His grace.

“But Jesus bent down and started to write on the ground with his finger.” (John 8:6)

We don’t know what He wrote in the sand, but I think no matter what words He chose, every letter He inscribed was writing grace on her heart.

Where shame was exposing that woman, grace was covering her.

Where shame was condemning that woman, grace was forgiving her.

Where shame was isolating that woman, grace was accepting her.

And, my final words to you, my dear sister? Chin up, stand tall… SHAME OFF YOU!!