If you’re facing something hard, big or scary and if you’re weary of the daily grind, then Zechariah has something you need to hear. You are gonna love this. 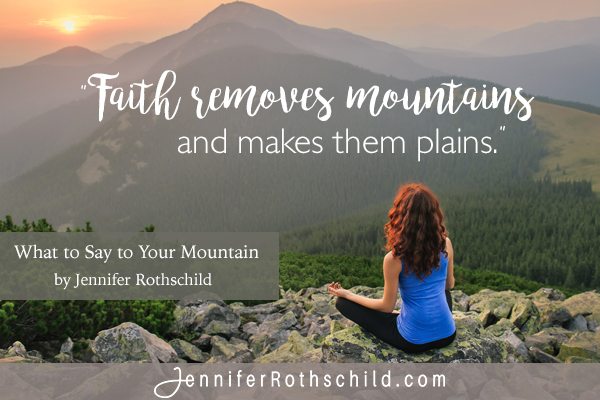 “This is the word of the LORD to Zerubbabel saying, ‘Not by might nor by power, but by My Spirit,’ says the LORD of hosts. ‘What are you, O great mountain? Before Zerubbabel you will become a plain; and he will bring forth the top stone with shouts of “Grace, grace to it!”‘ Zechariah 4: 6-7.

Okay, here’s the context: This obscure Old Testament passage records the prophecy Zechariah was to give to Zerubbabel concerning the completion of the Temple. The Jews had returned to Judah after the Babylonian Exile and their temple needed to be rebuilt.

The construction site had laid dormant for 16 years. The rebuilding was at a standstill and the longer it loomed, the harder it probably seemed. It was like a mountain.

So, the Lord told Zechariah to tell Zerubbabel that the mountain of the rebuilding would be pulled off not by man’s might, but by God’s Spirit in them. God looked at the project and said, “What are you, O great mountain? Before Zerubbabel you will become a plain…”

Do you have mountains? Do you ever ask, “What are you, oh great mountain?” I want you to think about your mountains and do two things.

In other words, what is your mountain? What is that thing that seems big, looming, hard to overcome, difficult to see past or seemingly impossible to climb? Is it a physical situation like cancer? Perhaps your mountain is unseen but just as real like depression or fibromyalgia? Your mountain may be a teenager who is breaking your heart or an aging parent who you feel powerless to help. Your mountain may be a hard marriage, childlessness, job loss, over-eating or unwanted divorce.

There is a range of mountains we face in this life—all different but what they have in common is that they are all obstacles that seem hard to overcome. We feel fatigue and uncertainty as we try to climb them. Their terrain is rugged and has dark places and danger spots we just can’t anticipate.

Fill in the blank in your mind: my mountain is ____.  (Only one mountain for now! I know lots of us have the emotional equivalent of the Himalayas, but just focus on one right now.)

Now, apply the sentiment of this question that Zechariah posed.  He asked, “What are you, oh great mountain?” Well, maybe it’s only me, but I hear him using a sneaky sarcastic tone as he asks that question. Even the use of “great” makes me hear an exaggeration in his inflection. It’s as if he’s talkin’ trash!  “Who do you think you are, you big, bad puffy heap of dirt?! You think you’re somebody, big boy?!”

I can just hear him taunting, “Mountain?! Yeah right! An itty-bitty molehill is more like it! “What are you great mountain?”

If you’re weary of the daily grind, then Zechariah has something you need to hear
[Click to Tweet]

Matthew Henry wrote about this way back in 1708 so pardon his ‘thees’ and thous’! But it’s just so good.

“Who art thou that lookest so big, that thus threatenest, and art thus feared? Before Zerubbabel, when he is God’s agent, thou shalt become a plain. All the difficulties shall vanish, and all the objections be got over. Every mountain and hill shall be brought low when the way of the Lord is to be prepared,” Isaiah 40:4.

Faith removes mountains and makes them plains. Christ is our Zerubbabel! He faced mountains of difficulty, but He proved nothing is impossible for God.

Sometimes God removes the mountains we face. But if He doesn’t, He will make your mountain as easy to cross as a plain—a smooth terrain. That is what God can do. So, say to your mountain, “What are you, oh great mountain?! You ain’t nothin’ compared to my great God!!”

You’ve got this. Invite God in as you walk toward the mountain and meet it face to face. He will be with you every step of the way and make the mountains plain by drawing near with His presence.

Question: What mountains are you facing right now? Has one of your mountains ever become a plain? Share below.