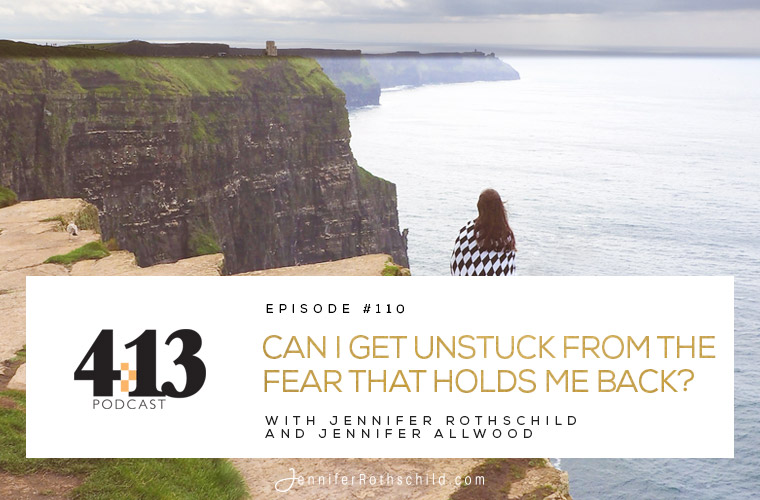 Have you ever felt stuck? My friend, Leslie, sure has—and, girl, we’re talking quite literally!

Fear is not the boss of you. It’s time to give fear a pink slip and risk living the life God created you to live. [Click to Tweet]

It was years ago when the vocal ensemble Leslie was a member of performed at a church. Her group had just finished singing and was supposed to sit in the front row after leaving the platform. Well, Leslie needed to go to the bathroom. So she decided to slip out as inconspicuously as possible.

Now, it wasn’t her home church, and she didn’t know the building. So Leslie walked down the side aisle and noticed there were two doors in the back. She wasn’t sure which door was the exit, so she picked one, walked through it, and closed it behind herself.

But she’d guessed wrong! It wasn’t the exit—it was a janitorial closet! So much for being inconspicuous, right!?!

What a perfect picture of how you and I feel when we’re stuck, right?

While you may not be standing in a janitorial closet, you might be in a situation where fear is holding you back. You may think you won’t make it through, or you won’t do it right, so you just don’t do the thing. You’re stuck in fear and old patterns.

If that’s where you are right now, you’re going to love this episode of the 4:13 Podcast. Author and life coach Jennifer Allwood is here to help you get unstuck. You’ll learn how to break free from old patterns that hold you back and risk living the life God created you to live.

Jennifer is a passionate cheerleader of women who adds biblical truth to the modern-day “dream big” mantra. Her no-nonsense approach to doing things you are scared to do and saying yes to God is helping women everywhere build the life and business of their dreams. She’s a life coach, author, wife to Jason, and mom to four kids—oh, and their Golden Doodles, Stella and Lola.

So, consider this a pink slip for fear. It’s about to be fired from your life because fear is not the boss of you.

4 Practical Steps to Help You Get Unstuck

Friend, you don’t have to live stuck—in defeat, in despair, or without Jesus. As Jennifer said, you can leave Stuckville because you can do all things through Christ who gives you strength.