I want to thank you for praying for me Tuesday! I’ll fill you in on what I was doing. 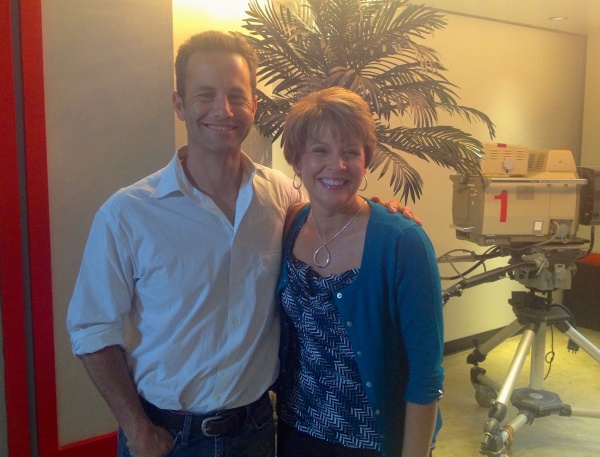 Kirk Cameron and Jennifer backstage at the studio.

Guess who invited me for an interview?! Kirk Cameron! He sat in as a guest host on the Glenn Beck Show this week, and he asked me to join him.

You may know him from the 90’s TV hit series, “Growing Pains,” or from the more recent “Left Behind” movie series and “The Way of the Master” TV show. His most recent movie, “Fireproof” is one of my favorites. I met Kirk several years ago and was immediately impressed by him. He is a smart, witty, warm, kind talented brother-in Christ.

I was one of four guest he invited to the show. It went so well! Mainly because of YOUR prayers and the fact that Kirk is a gifted man used by God.

Speaking of that, he just filmed a documentary entitled “Unstoppable” which will be in theatres for ONE DAY ONLY: September 24. Check out the trailer and see why I will be watching. Truly, I’m grateful to see how he is so aptly representing this difficult and universal topic. Wanna know what it is? Watch the trailer! That way you can also hear a song I just love written and performed by Warren Barfield.

Warren, as a matter of fact, was one of the guests on the show with me. The man is a Dove nominated Christian artist and songwriter. You may even know one of his songs called “Love is Not a Fight.” It’s actually the theme song of “Fireproof.” The guy is down to earth and unassuming and then he opens his mouth to sing and bam! Fantastic talent! You’ve got to check him out if you don’t know him yet. I am definitely a fan!

Then, there was Nate. Well, at least that’s all I really knew him as we munched on salads and talked all things CS Lewis before the show. Then, I realized he was ND Wilson. He authored the “100 Cupboard” series for young adults and “Ashtown Burials,” among many popular books. He such an interesting and delightful guy who I could have talked and listened to for hours! You simply must check out his books.

And, then there was this little known guy named Glenn. Okay, kidding. Glenn Beck is a towering figure in our culture and standing next to the man, he towered over me too! How tall is this dude, anyway?! Lots taller than me, that’s for sure! (I know what you’re thinking–that’s not saying much). He’s well over 6 feet tall, though.

Myself and those three were at the studio to film, with the last and final guest joining the show via Skype. Guess who that one was? Dr. Ben Carson! It’s probably a good thing he wasn’t there because I would have embarrassed myself in front of him. I’m such a big fan! I read his story “Gifted Hands” years ago. So inspiring! If you haven’t read it, you must. He is truly an American hero. If you are a news junkie, you may remember that he spoke at the National Prayer Breakfast on the National Day of Prayer this year.

Well, those are the details and the recap. Last thing: the show airs on Dish Network 212 on Tuesday, September 3 or on-line on Blaze TV.com. The website is available as a paid subscription but there is a 14 day free trial. Hint. Hint.

Please pray for the audience that will view the show on Tuesday as it lifts up the Christian message of hope and faith. I am praying that God will use the show to draw many to learn more about the Christ.

Well, that’s it. More later. Next week I’ll give more details about the interview!

Go ahead. Leave a comment for Kirk Cameron by including @theRealKirkCameron in the comment box below. He’ll be notified.

Leave a comment here. Add @theRealKirkCameron if you want Kirk to be notified.