For all of you wondering, our interview aired this week on Blazetv.com! I’m so excited. 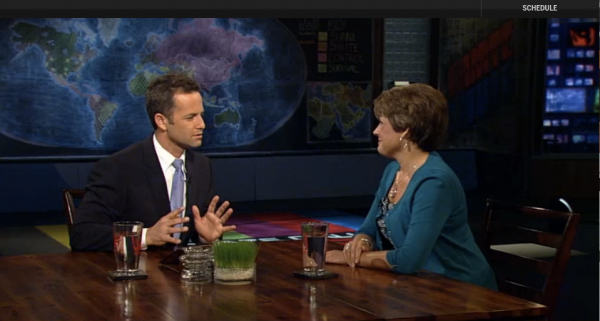 Jennifer and Kirk on the Glenn Beck Program. Snapshot from The Blaze TV.

Since some of you may not be able to see it, I thought I would tell you a little bit of what Kirk Cameron and I talked about. For those of you that don’t know, he guest hosted on the Glenn Beck show this week, and invited me to come and talk. We talked about some of the big questions of faith like, “If God is good, why do bad things happen?” and, “Is God really fair if He lets innocent people suffer?”

Well, to sum up my answers, I offer this statement: God is just, not fair. In other words, God is just, perfect, and right in all His ways. His ways may not always “feel” right or perfect for me, but He is just in the way He governs as King of the universe.

The nature of our conversation really pointed to the hard subjects that Kirk deals with in his new documentary, “Unstoppable” and to the contents of my video bible study, “Missing Pieces.”

I told this story on the show, and I tell in the video of Missing Pieces. It will ALSO be featured in detail in my new book coming out in March of 2014 with Zondervan. It’s called, “God is Just Not Fair.” Anyway, here’s a sneak peek of the story as it will appear in the book next year, so you can get an idea of what Kirk and I talked about!

Excerpt from “God is Just Not Fair” and recap of my Kirk Cameron interview:

It was an ordinary July day in a Tallahassee movie theater during the cheap movie series, or at least that’s what I used to call it. Our local theater featured cartoon movies during the summer for just $2–and that included the popcorn. On a Wednesday morning, I got three-year-old Clayton dressed, packed the diaper bag, and slipped my Walkman cassette player (yes, this was before CDs) into my purse. This was the third movie in the series and I had finally figured out how to entertain myself during the ninety minutes of cartoon silliness.

I grabbed a message tape given to me many years earlier. I had never listened to it because even though I was curious about it, I also dreaded it. I knew the speaker’s story … one that was both similar to and different from my own. I was afraid to hear it, to feel it, and then have to deal with it.

I have never enjoyed going into dark movie theaters because they’re so difficult for me to get around in. On this day, it wasn’t so bad because I had my friend, Becky, as my guide. She brought along her son David, who was Clayton’s age, and helped all of us find our seats and settle in. As soon as the previews began, I inconspicuously pulled out the ear buds attached to the Walkman hidden discretely in my bag. I could hear Becky and the boys giggling and I knew all six eyes were focused on the screen. So I pressed play and began to listen to the tape.

God’s ways may not always “feel” right or perfect for me, but He is just in the way He governs as King of the universe.
[Click to Tweet]

The speaker’s name was Marolyn Ford. She was a few years older than me, but her story was painfully familiar. She spoke of slowly losing her sight and described her emotions and challenges in a way I recognized all too well. She shared about her life as a wife and mother, and also how tired she was of being blind. I knew how she felt.

I too had slowly lost my sight. I too was a wife and mother. And I too was so, so tired. Blindness is draining. Even as I sunk into the theater seat, exhaustion washed over me. It wasn’t a physical tiredness, but an emotional, mental, and spiritual fatigue that zapped me. Keeping my sadness and frustration in check is emotionally draining all by itself. Trying to remember phone numbers, appliance buttons, my schedule, my to-do list, where I am walking and where I place things so I can find them again are all reasons blindness is mentally draining.

And then there’s the spiritual fatigue. Loving God and hating blindness, and wanting to trust God while wondering why He hasn’t healed me, makes me live in a perpetual state of spiritual weariness.

So, there I sat, identifying completely with Marilyn Ford. But there was a point in her message when every part of me wanted to turn off the tape. I knew she was about to describe the part of her story I would not be able to relate to–something that would feel like salt on my open wound. But, for some reason, I kept listening.

In the darkness of the theater, in the darkness of my blindness, I listened to her describe the night she cried out to God for healing. She shared how she and her husband prayed. She then described how, after praying, she could see again. She could see not just a little bit, but completely.

Tears welled up in my eyes. She continued to tell the story of how she went to the eye doctor after her healing, and the doctor gasped as he confirmed that she could see—even though she had no retina. Her healing was a full-blown, certifiable, unreasonable miracle!

Tears were now streaming down my cheeks. How could I reconcile God’s decision to heal the blindness of one of his children but not the other? How could I carry the joy I felt for what God could do in the same heart that breaks because of what God won’t do?

I was genuinely happy for Marolyn because I knew intimately what she had received and the burden she was now free of. I really was astonished and thanked God for her healing.

Becky, Clayton, and David had no idea what was happening next to them in the theater that day, but I have never forgotten it. I came face-to-face with one of the hardest questions of faith: Why one and not the other?

Deep down, I didn’t think it had anything to do with Marilyn’s faith versus my faith. Nobody deserves healing based on their degree of faith or lack of faith. The faith we have is a gift of God’s grace. Would God give her a bigger gift than He gave me just so she could please Him more and therefore receive more from Him? That didn’t make sense.

My sorrow wasn’t because I was jealous. Really, I wasn’t. With all I knew about how hard it is to be blind, I was genuinely happy for her. My sorrow was because we loved the same God, and we had the same eye condition, but we had very different outcomes. She was healed. I was still blind.

As the movie came to a close, I wiped away my tears and asked God for composure. I just didn’t want to talk about it with anyone that day. In fact, I have never talked about it until now. It was such an intimate, raw, hard moment between me and God.

I had to confront the unfairness of the God I loved. I didn’t want to feel those emotions and question my faith. I just wanted to paste a mushy greeting card over that very broken place in my heart that said, “Let go and let God.”

Instead, I had to face up to the question, “God, are you fair?”

The first part of my interview with Kirk Cameron

Kirk Cameron deserves a shout-out! He’s the real deal. To leave a comment for Kirk, include @theRealKirkCameron in the box below. He’ll be notified.