What weapon do you use when you find yourself on a battlefield?

Let’s face it. Battlefields are all around us. It often feels like right in the middle of a happy day, we are called to the front lines, fighting for our joy, and standing in faith against the enemy. 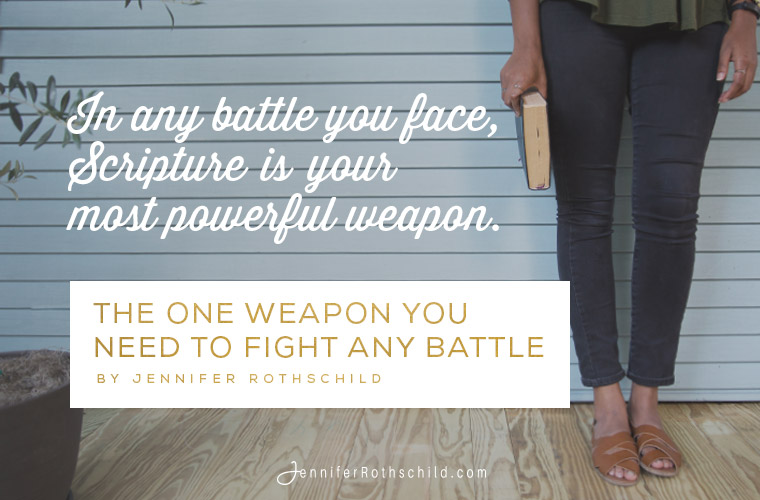 And, when that happens, you and I need a weapon.

As much as I hate to admit it, sometimes God lets us face battles so we can learn that we already have the only weapon we need to be victorious.

It’s the same weapon Jesus had when He was in a battle against His enemy.

Matthew records that He was “led up by the Spirit into the wilderness to be tempted by the devil. And after He had fasted forty days and forty nights, He then became hungry” (Matthew 4:1–2).

When we are on a battlefield, we can use the same weapon Jesus did against His enemy. [Click to Tweet]

When Jesus faced the enemy in that desolate place, He could have used any weapon at His disposal to knock Satan out with a humiliating defeat. Besides the fact that Jesus was God incarnate, possessing unlimited power, consider what else He had going for Him in the weapons department.

First, Jesus was a rabbi—a religious “professional,” you might say. Familiar with the Law and the Prophets, He lived a tidy, good, religiously-upstanding life—actually, a perfect life with no sin!

He could have pulled out the “religion” weapon from His arsenal during that duel in the desert.

That’s what we may be tempted to do at times. When the battle gets hot, we may try to pull out our religious experience, our good works, or our virtue to deflect the enemy’s attacks.

But that’s a bad idea.

Scripture says that “all our righteous acts are like filthy rags” (Isaiah 64:6). We can’t fight a fierce enemy with a filthy rag, my friend—and that’s what empty religion is—a flimsy weapon.

No matter what you face, you can trust God’s Word to guide you. If you’re looking for guidance today, here are three ways God’s Word can do this in your everyday life.

Second, Jesus had a great personality. The Gospels portray Him as a kind teacher, compassionate friend, popular speaker, gentle leader, and compelling storyteller.

He was persuasive—great with the spoken word. Perhaps He could have convinced His enemy not to hit so hard, or to join Him in a peaceful singing of “Kumbaya.”

Our strength and personalities can’t help us fight the enemy of our souls. Only God’s Truth can.
[Click to Tweet]

He could have pulled out the weapon of personality-plus and fought, but He didn’t. Not for a moment—and neither should we.

How often do we muster all of our strength and the collective attributes of our personality and try to stand against the enemy of our souls? But it won’t work. We can’t fight spiritual battles with weapons of the flesh.

Our great personalities and charisma are not weapons—only Truth is a weapon.

The Only Weapon You Need

Jesus could have struck down Satan any way He chose. After all, He was the Son of God with an endless arsenal. But, instead, He engaged the enemy with the only weapon that guarantees victory: the sword of the Spirit, or the Word of God (Ephesians 6:17).

And, all three times, Jesus countered the assaults of hell with “It is written…” The living Word of God quoted the written Word of God to beat back the enemy’s attack.

How can you and I do any less when it comes to our battles? “It is written” should be our weapon of choice.

The sword of the Spirit, or the Word of God, is the one weapon you need for any battle. [Click to Tweet]

We should never counter the attacks with, “It is my religious experience,” or “It is my personality.” Those weapons will always bring defeat and may even complicate and make the battle last longer. But God’s Word is the one weapon that will always bring victory and cut off the enemy.

There is no weapon more powerful than God’s Word.

So, if you find yourself on a battlefield feeling alone, don’t lose heart and don’t reach for the wrong weapon. You are not alone, and you have the best weapon ever! God’s Word is the weapon that will bring you victory, comfort, and provision.

So, here are a few verses to carry along with you.

“Submit therefore to God. Resist the devil, and he will flee from you” (James 4:7).

“You are from God, little children, and have overcome them; because greater is He who is in you than he who is in the world” (1 John 4:4).

“For whatever is born of God overcomes the world; and this is the victory that has overcome the world—our faith” (1 John 5:4).

“And they overcame him because of the blood of the Lamb and because of the word of their testimony, and they did not love their life even when faced with death” (Revelation 12:11).

How are you using the sword of the Spirit to fight your battles? Let’s strengthen one another by sharing in the comments below.

Comment | Share | Tweet | Pin It | print | email
Category: Blog
Disclosure of Material Connection: Some of the links in the post above are “affiliate links.” This means if you click on the link and purchase the item, I will receive an affiliate commission. Regardless, I only recommend products or services I use personally and believe will add value to my readers. I am disclosing this in accordance with the Federal Trade Commission’s 16 CFR, Part 255: “Guides Concerning the Use of Endorsements and Testimonials in Advertising.”