Sometimes life just wears us out, right? When we have to climb mountains of stress or sorrow, we just get tired. Hard stuff can wear us out and leave us feeling powerless.

But, sometimes our most vulnerable tired comes after we have stood on a mountain of success and seen God’s power. 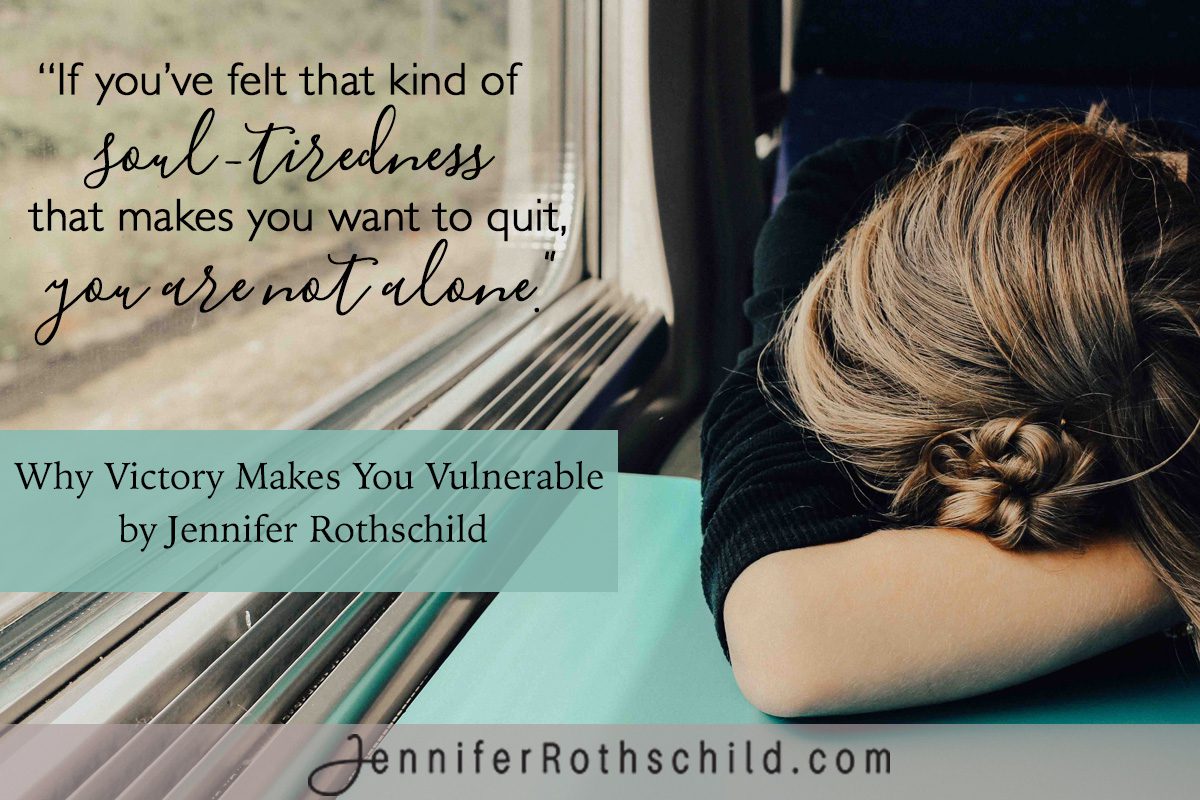 Have you ever felt that kind of exhausted – the kind of soul-tiredness that shows up on the heels of a race well run?

Oh, I have. It seems like every November it happens to me. In fact, it has been so consistent that I call it “dark November.” I finally figured out why — November is when my ministry travels slow down. November is when I have come down from the mountain where I have seen God’s power, and, believe it or not, that’s the time I am most ready to quit!

It is the time I question my calling and my gifts. I review all my failures and convince myself that I really am not qualified.

You would think that that kind of dark self-reflection would follow failure, but I am most vulnerable after success.

If you’ve felt that kind of soul-tiredness that makes you question everything and want to quit, you’re not alone – an Old Testament prophet felt that way too.

Elijah was ready to throw it all away — not because he was defeated, but because he had just won!

Beneath a broom tree in the desert, he prayed, “I have had enough, Lord… take my life.”

Do you know when he uttered such weak, pitiful words?

It was right after an earth-shaking mountaintop experience on the peak of Mount Carmel. He had just called fire down from heaven and seen his adversaries fall to their knees. Then he had prayed for God to send rain, and the heavens opened with a thundering deluge. He was firing on all cylinders, but soon he had a meltdown.

Elijah went from the height of the mountain to the depths of the valley.

Do you ever feel like quitting? Learn how you can avoid Elijah Episodes and speak rest to your soul in my book Me, Myself, & Lies. Watch this one-minute video to learn more.

The same man who stood strong before 450 prophets of Baal ran like a coward from one woman who threatened to kill him. Exhausted, Elijah curled up in a fetal position under a tree in the desert and slept until an angel woke him up and made him eat.

The great prophet was tired, hungry, and emotionally drained… all triggers that make us feel as if we, too, have just had enough.

The truth is that you are the same fragile, strong, brave woman you were before the battle, during the battle and in the midst of victory.

God is the same God who was with you before the battle, during the battle and in the midst of victory.

If you are having an Elijah Episode, maybe you just need to rest or eat or take an emotional break so you can refuel. It’s okay to have moments when you feel like you have just had enough because maybe… just maybe… you have.

Sometimes the best way to fight is not to armor up, but to curl up and rest in the Lord.
[Click to Tweet]
Maybe you just need to wrap yourself in your blanket of faith and rest and let God feed you.

Sometimes the best way to fight the lies that hit us when we are most vulnerable is not to armor up but to curl up and rest in the Lord.

The psalmist told his soul to rest and that is what I now tell my soul during my Elijah Episodes, too.

Rest in God alone, my soul, for my hope comes from Him. Ps. 62:5
[Click to Tweet]
Tell your soul it’s okay to be tired and rest in Him today.

Rest in God alone, my soul, for my hope comes from Him. Psalm 62:5 HCSB

What about you? Do you struggle with feeling vulnerable after victory? If so, give us some ideas of how you handle it.