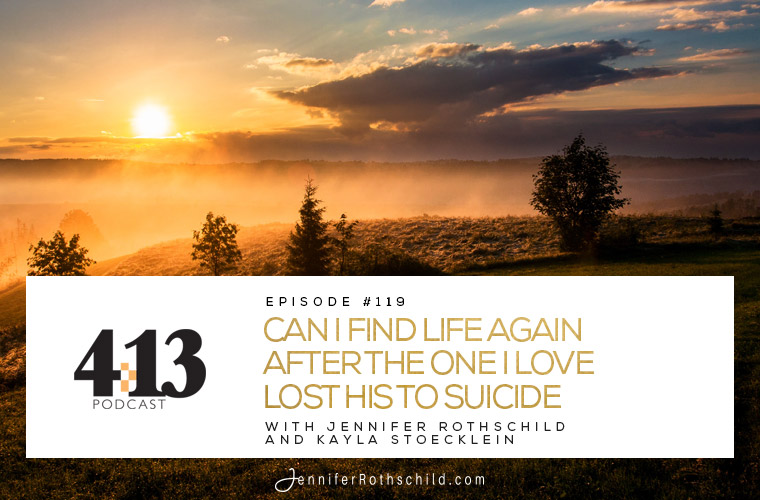 On August 25, 2018, Kayla Stoecklein lost Andrew, her husband and a Southern California mega-church pastor, to suicide. Though her life was shattered, God’s healing is all over her story.

Here are three big myths of mental illness and how we can overcome them. [Click to Tweet]

Today, Kayla is the author of Fear Gone Wild: A Story of Mental Illness, Suicide, and Hope Through Loss and an advocate for those confronting mental illness. When she isn’t busy raising her three young boys, you can find her on the beach, sipping an iced coffee, and searching for little glimpses of heaven on earth.

And, in this episode of the 4:13 Podcast, Kayla shares an intimate account of what led to the tragic day Andrew died by suicide and the light she’s found in the darkness. You’re about to experience a powerful and hopeful conversation that you need to hear.

You’ll learn three myths of mental illness and how to overcome them. Plus, you’ll get a rare front-row seat into Kayla’s life and see what it looks like to find your life again, even if someone you love loses theirs to suicide.

3 Big Myths of Mental Illness and How to Overcome Them

No matter what or who you’ve lost, you can build a beautiful life again. [Click to Tweet]

Friend, no matter what or who you’ve lost, you can build a beautiful life again. As Kayla shared, while the pain won’t go away, the grief will grow smaller and tap the pain button less and less often.

So, although today’s feelings are heavy and real, they aren’t allowed to be a team of fiction writers for your future. You will not always feel this way. Kayla proves it. Through Christ’s strength, you can rebuild.

Until next week, may the God of hope fill you with all joy and peace as you trust in Him, so that you may overflow with hope by the power of the Holy Spirit.